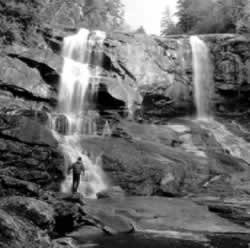 The Nantahala Mountains section [Fig. 29] is bordered by the Great Smoky Mountains National Park to the northwest and the Georgia and South Caroli- na borders to the south. The boundary for this section runs southeasterly from the park to the state lines, one running between the towns of Cherokee and Maggie Valley and the other through the Nantahala River Valley just east of Robbinsville. The Blue Ridge Parkway winds down to its terminus here (or gets its start, depending on your perspective). Framed on the northwest and southeast by the Smoky Mountains and Blue Ridge Mountains, respectively, the major cross ranges of this section include the Nantahala, Cowee, and Cheoah mountains.

The diversity of plants and animals found here and throughout the mountains of Western North Carolina is due in part to the tremendous volume of precipitation that occurs here each year. This is especially true in the gorges of Nantahala National Forest. In fact, the southwestern mountain slopes that give rise to the headwaters of the Savannah River likely receive the heaviest rainfall in the entire Blue Ridge province from Virginia to Georgia. Some areas of the region receive as much as 100 inches of precipitation per year, approaching that of the Pacific Northwest rainforests and ranking Western North Carolina among the wettest of the contiguous 48 states. Where does this water come from and why does it fall here?

The story begins in the Gulf of Mexico and the southern Atlantic coastal plain states, where offshore moisture rises into the atmosphere and moves northward, forming thick cloud layers. As this warm, saturated air meets the cooler temperatures of the southern Appalachians, it condenses in the form of fog, rain, and snow because cold air cannot hold as much moisture as warm air. Thanks to this frequent and abundant odyssey of water, the mountains of Western North Carolina are lush with a diversity of plant species greater than that found in all of Europe.

It was not always known that precipitation is the source of mountain springs and rivers. Homer speculated on the origins of this water as early as 1000 b.c. and began what was known as the "subterranean school" of groundwater geologists. Aristotle proposed that the interior of mountains somehow condensed rainwater to produce the moisture seen in springs. Kepler theorized that a large, ocean-dwelling animal drank sea water and passed it up to higher elevations where it was excreted as freshwater springs. Nearly as improbable was Kirchner's theory that whirlpools near Norway fed Europe's springs via underground caverns. By the 1700s, the subterranean school of thought became obsolete.

Geologists finally proved that precipitation is the true source of mountain springs and rivers. By the early twentieth century, numerous experiments showed a direct correlation between the amount of rainfall in a drainage basin and all of the resulting stream flows in the same basin. The only precipitation the streams did not account for was shown to be lost through evaporation from the forest leaves, transpiration (the pumping of water out of the soil by plants), and the absorbent capabilities of the soil.

Through hindsight, this process is easily seen today. The mountain forest canopy trees are the first to receive precipitation, catching much of it on a vast network of leaves and branches. Once saturated, the canopy allows the excess to fall on the understory dogwoods, silverbells, birches, basswoods, mountain laurels, and rhododendrons. Yet, even these cannot catch all of the moisture, so the groundcover ferns, mosses, partridgeberries, and wildflowers then get their share. 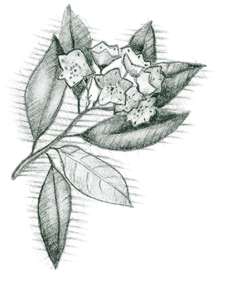 The rain continues to fall, soaking into forest floor leaves and humus and the thin soil layers that overlie massive schist, gneiss, and granite rock foundations. When even these spongy soil layers become saturated, the excess water leaching through may be halted by impermeable underlying rock and begin flowing along this underground boundary. Where opportunity presents itself, this underground water surfaces in the form of springs.

Meanwhile, on the soil surface, there are no more plant barriers to halt the downpour, and the excess water flows in sheets down the broad mountain slopes. Detouring at every swale, ditch, and gorge, the various sheet flows and springs gather and grow, forming vast mountain capillaries of creeks and streams. These join together and, upon reaching lower elevations, eventually carry enough water to earn the label "river."

Some of this water eventually makes its way over cliffs and sheer rock walls, forming the abundance of waterfalls for which Western North Carolina is renowned. In some regions, such as the Nantahala Mountains, the underlying rocks are composed of hard metamorphic rock, and the number of waterfalls far surpasses those in areas with softer, sedimentary rock, such as that found in the Snowbird Mountains. The abundance of precipitation and the topography of the region also contribute to the number of waterfalls.

Throughout the book, terms such as cataract, cascade, and rapid are used to describe water flow. While local preferences often win out over more scientific explanations, the following definitions are a general rule of thumb. Cataract refers to the largest volume of water, as in Rainbow Falls near Sapphire. A cascade is a smaller waterfall that tends to flow over boulders rather than sheer cliffs and generally does not have a pool or basin. Rapids, such as those found within the Nantahala River, are intermittent areas of whitewater. Slides occur when the water flows in sheets along the surface of the rockface; Sliding Rock in the Balsam Mountains section is an excellent example. The word "shoal" shows up often in the names of areas or roads. A shoal is generally a shallow, rocky area on a river. Whatever the size or shape, waterfalls play an important role in oxygenating the water, which provides habitats for some of the wide-ranging flora and fauna that thrive in Western North Carolina.