[Fig. 31] An outline of the Nantahala National Forest more closely resembles coffee spatters than official survey lines. More than 516,000 acres span from Waynesville to Murphy, Fontana Village to Cashiers, across the crest of mountain ranges and over hundreds of waterfalls to the river valleys and lakes below. The state's largest national forest, Nantahala National Forest includes topography ranging from a high of 5,800 feet at Lone Bald to a low of 1,200 feet on the Tusquitee River.

The Nantahala National Forest was established in 1920 and took its name from the Cherokee word nondayeli, meaning "noonday sun." The Cherokee word is appropriate because of the number of steep gorges in the forest that only receive sunlight when the sun stands directly overhead. The Nantahala, Cullasaja, Chattooga, and Tuskasegee gorges confirm the relevance of the forest's name. 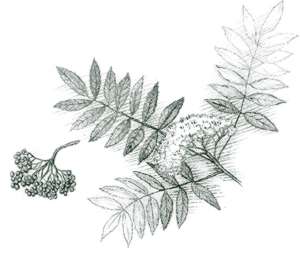 Three wilderness areas lie within the Nantahala National Forest: 3,930-acre Ellicott Rock [Fig. 35] near Highlands, 12,076-acre Southern Nantahala [Fig. 36] southwest of Franklin, and 13,132-acre Joyce Kilmer/Slickrock Wilderness Area [Fig. 38] near Robbinsville. Four ranger districts cover the forest: Wayah Ranger District, with 133,894 acres in Macon, Swain, and Jackson counties; Tusquitee Ranger District, the largest district with 158,348 acres primarily in Cherokee County but including Clay and Graham counties as well; Highlands Ranger District, with 105,084 acres in Macon, Jackson, and Transylvania counties; and Cheoah Ranger District, with 120,110 acres in Graham and Swain counties. In 1981 the Highlands Ranger District acquired 40,000 additional acres and created what is now referred to as the Roy Taylor Forest, in honor of the U.S. congressman's love and respect for the mountains.

The diversity of the Nantahala National Forest is explored in the Nantahala Mountains, Snowbird Mountains, and Long Trails sections of this book. The Standing Indian Basin [Fig. 36], for example, is honeycombed with hiking and riding trails, and the Fires Creek Rim Trail [Fig. 32(16)] follows a 25-mile ridge around its namesake to scenic views, heath and grassy balds, and a hardwood forest filled with wildflowers. Water sources here include the rugged Nantahala, Chattooga, and Horsepasture rivers, a chain of lakes lapping gently in the shadow of the mountains, and waterfalls roaring and tumbling down to basins below. The Mountain Waters Scenic Byway [Fig. 34] winds for 61.3 miles through southern Appalachian hardwood forest, rural countryside, two spectacular river gorges—Cullasaja and Nantahala—and numerous scenic waterfalls. The route leads from the town of Highlands along US 64 west to NC 1310 and US 19, where it ends at Fontana Lake.

It is difficult to isolate only a few of the awe-inspiring features found throughout the Nantahala National Forest, though two natural wonders beg a mention: Joyce Kilmer Memorial Forest and Whiteside Mountain. Joyce Kilmer, near Robbinsville, is one of America's most magnificent old-growth forests, featuring 100 species of trees, some soaring more than 100 feet high with a circumference exceeding 20 feet (see Joyce Kilmer). Rising nearly 5,000 feet above the earth, Whiteside Mountain, between Cashiers and Highlands, offers spectacular vistas along rocky crags that share the sky with soaring hawks and falcons (see Whiteside).