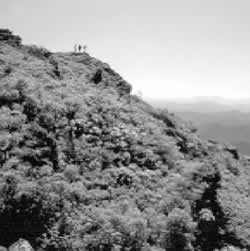 In the Black Mountains [Fig. 10], the Blue Ridge Mountains reach their grandest scale, higher and more massive than anywhere along their Pennsylvania-to- Georgia expanse. This section of mountains covers an area extending from Boone in the north to Mount Mitchell in the south and bordered on the east by the Blue Ridge escarpment and on the west by the Unaka Mountains. The Blue Ridge Parkway [Fig. 11] courses down its heart, along its ridges, and in the shadow of its peaks. And while all of Western North Carolina is a natural wonderland, this section offers some of the most remarkable geological sites and botanical specimens in the eastern United States. The mountains of North Carolina can be confusing because many share the same name. Consider the Black Mountains. Three peaks in three different areas of the state bear that name. The town of Black Mountain is connected with none of them. Moreover, the Black Mountains aren't black; early settlers called them "Black" because of the dark appearance of the fir trees that cover the mountains.

Many times, similar names were used because of the isolation the mountains created. The railroad did not open up the mountains until late in the nineteenth century. As a result, good maps were not available until the turn of the century, and even then, the mountain names selected for maps were usually names used by the local people. The same name continued to be used for different mountains and towns, and confusion persisted.

The Black Mountains, a single, relatively short, horseshoe-shaped ridge extending only 15 miles, are the chief cross range of this section but feature a dozen peaks towering more than 6,000 feet in elevation. Its peaks, often with colorful names such as Potato Hill, Cattail Peak, and Big Tom, include Mount Mitchell (see Mount Mitchell), which holds the distinction of being the highest peak east of the Mississippi with an elevation reaching 6,684 feet.

The mountainous topography affects many aspects of life in the Black Mountains. The height of the mountains changes the air temperature at the rate of approximately three degrees Fahrenheit for every thousand-foot elevation change. At the higher elevations of Mount Mitchell and Grandfather Mountain, habitats more common to New England and Canada support many boreal plants. The mountains also affect rainfall—conditions are wetter on the windward or westward side and considerably drier on the east. Mount Mitchell, for example, receives up to 80 inches of rain each year, twice what falls on Asheville just 25 miles south.

Rivers within this section are directed east and west by the Eastern Continental Divide. Atlantic-bound rivers include the Linville, Yadkin, Johns, and Catawba rivers. The New River is born here among the streams on Flat Top Mountain before heading ultimately to the Ohio River, Mississippi River, and Gulf of Mexico. Other western-flowing rivers include the North Toe, South Toe, Cane, and Nolichucky. The topo-graphy of the region affects the speed as well as the direction of the flow. Streams and rivers on the eastern rim travel steeper slopes, gaining speed and cutting rapidly into the underlying rock. Consequently, the eastern slopes have eroded faster than the more gentle slopes of the western side, which, at least in part, explains the dramatic escarpment on the eastern rim.

The topography affects rivers in yet another way. Occasionally the slower western-flowing rivers are "captured" by a more energetic eastern river. For example, as the swift Linville River flows east toward the Atlantic Ocean, it erodes the land upriver and cuts the gorge behind it deeper. As erosion moves upriver over millions of years, the Linville River may change the continental divide, capturing a slower western-flowing river and bringing it east.

In addition to boasting the highest peak east of the Mississippi, this section includes other noteworthy features: a United Nations Biosphere Reserve, snow-covered mountain peaks that support a thriving ski industry, multichambered caverns, and such varied habitats that in some areas migrating birds only have to travel up and down the mountain slope as the seasons change. The first piece of national forest purchased east of the Mississippi lies within this section, southeast of the site of the first state park in North Carolina and near one of the original wilderness areas in the United States that remains as pristine and unspoiled as when the Cherokee lived there. The natural integrity of the region is enhanced by several man-made wonders ranging from botanical gardens to such engineering feats as Lake James and the Linn Cove Viaduct [Fig. 11(4)]. Finally, the region is rich in minerals and gemstones. Mining has played a key role in the economy here, and as more people visit the area, gem mines have opened to families and individuals. While some may call them "touristy," they provide a unique opportunity to expose people young and old to the wonders within the earth's crust.