[Fig. 17] Already venerable when the Rockies were yet unformed, Mount Mitchell reigns as the highest point east of the Mississippi at 6,684 feet.

The underlying rocks, part of the Ashe Metamorphic Suite, were deposited in a Precambrian sea and intruded by iron- and magnesium-rich magma approximately 800 million years ago. Several hundred million years later, land collisions forced layers within the earth to fold and fault and form great mountain chains. The rocks buried in the process were metamorphosed by heat and pressure into gneiss and schist, while deposits of sand and clay were also transformed into primary minerals— quartz, feldspar, and biotite mica. Concentrations of these minerals with their light and dark variations give the mountain's rocks a layered look. Though the durable mountain is erosion-resistant, millions of years of weather and water have slowly worn down what was once a much higher peak, leaving a still-rugged and majestic Mount Mitchell.

In 1916, at a time when extensive logging threatened the region's virgin, old- growth forests, Governor Locke Craig led an effort that resulted in the establishment of Mount Mitchell as North Carolina's first state park. The 1,700-acre protected area that extends approximately 5 miles along the summit of the Black Mountains preserved a piece of a unique ecosystem, where alpine forests exist in the South. 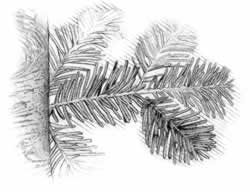 Mount Mitchell's peak is well known as a biological island, an isolated environment that the retreating glaciers of the Pleistocene left behind. At its higher elevations, the mountain receives 60 inches of annual snowfall and records average daily temperatures of 51 degrees. Certain subspecies of flora and fauna are found nowhere else, and some migrating birds, including wrens, Carolina chickadees (Parus carolinensis), and slate-colored juncos (Junco hyemalis), have only to travel up and down the mountain with the changing seasons.

The history of measuring and naming this ancient landmark is appropriately filled with tales of hardy and individualistic mountaineers. In 1787, when French botanist André Michaux came to gather cuttings of the range's more than 2,500 specimens of trees, shrubs, and other plants, he predicted that the highest peak in eastern North America would be found in the Black Mountain range. Elijah Mitchell, a science professor at the University of North Carolina and head of the North Carolina Geologic Survey, set out to prove just that in 1835, using bear trails, a mountain guide named Big Tom, a barometer, and mathematical formulas.

After several expeditions, Mitchell calculated the elevation of the range's highest peak at 6,672 feet, only 12 feet below its true height. When his former student and then-U.S. Senator Thomas Clingman disputed his claim in the 1850s, the elderly Mitchell returned to verify his measurements. Tragically, he fell from the rocks above a 40-foot waterfall, was knocked unconscious, and drowned. His body was buried atop the mountain that bears his name. Lower peaks nearby were christened Clingman's Peak and Big Tom.

Ninety-one species of birds, many more characteristic of New England and Canada than North Carolina, can be found here, including golden-crowned kinglets, red crossbills, and ruffed grouse (Bonasa umbellus). Twenty species, such as evening grosbeaks and purple finches (Carpodacus purpureus), are thought to spend the winter in the park. Hobblebush (Viburnum alnifolim), oxalis, oxeye daisy (Heliopsis helianthoides), purple-fringed orchis (Habenaria fimbriata), and other plants, herbs, and flowers typically found in boreal forests are plentiful. Several threatened and endangered species found only in spruce-fir forests in North Carolina and Tennessee, such as Rugel's ragwort (Rugelia nudicaulis), spreading avens, and Heller's blazing star, also exist here. In August, the mountaintop is covered with red raspberries (Rubus idaeus). It is legal to pick berries and other edibles along National Park Service trails, but only what can be picked from the trail for self-consumption. 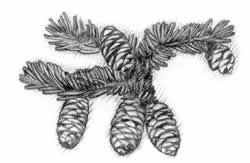 Mount Mitchell's peak and its top slopes were once densely covered with Fraser fir and red spruce. Now, only trace stands of the original climax forest remain, surrounded by younger specimens of fir and spruce, a graveyard of dying trees and decomposing logs, and shrubs such as blueberry and mountain cranberry (Vaccinium macrocarpon). Major research has been conducted into the massive dying of the mountain's spruce-fir forests. Scientists have determined that a tiny sucking insect, the balsam woolly aphid, is killing the Fraser fir. There is some hope that younger trees may develop resistance to the aphid, or a natural enemy may be developed to combat the insect (see Devil's Courthouse Trail). Other factors, more mysterious and indeterminate, are killing the red spruce. Air pollution, causing acid rain and high ozone levels, is thought to compound the crisis, weakening the trees' ability to withstand natural stresses.

At lower elevations, oak, hickory, silky willow (Salix sericea), and mountain maple (Acer spicatum) are now predominant, with mountain-ash most abundant at even lower elevations. Wood sorrel and ferns cover much of the ground, where downed logs are home to mosses and mushrooms. 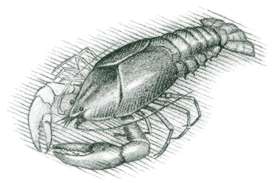 The park's five hiking trails lead to or just below Mount Mitchell's summit, where an observation tower provides 70-mile views on clear days. A detailed map is available at the park office. In addition, the mountain features five waterfalls.

[Fig. 21(14)] Sitting at the foot of the Blue Ridge escarpment, the town of Old Fort appropriately bills itself as the "Gateway to the Smokies." In fact, Old Fort has enjoyed gateway status for more than two centuries. In the eighteenth century, Old Fort was the westernmost outpost of the United States.

In keeping with its notable past, Old Fort hosts three historic museums, something of a record for a town with fewer than 1,000 people; all three museums are within an easy walk of one another in the heart of town. The Mountain Gateway Museum [Fig. 21(15)] features a collection of exhibits documenting pioneer life in and around the mountains. Displays of weaving and spinning natural fibers, herbal remedies, and local pottery flank the reconstructed log cabin on the second floor of the building constructed in 1936 by WPA workers. Outside, 200-year-old log cabins, a picnic pavilion, and an amphitheater hug the banks of Mills Creek, a tributary of the Catawba River.

A 12-minute video portrays the history of the area, including the massacre and expulsion of Native Americans who had made the mountains and valleys their home long before European settlers arrived. It seems fitting, then, that only two blocks away Grant's Indian Museum [Fig. 21(16)] houses the second largest collection of Native American artifacts in Western North Carolina. Arrowhead and gem exhibits; stuffed foxes and bobcats, white-tailed deer and bears; and Native American artwork and baskets are part of the eclectic and sometimes kitschy collection.

The town's 1890 Southern Railway depot now serves as a visitor center and railroad museum [Fig. 21(17)]. In a former waiting room and ticket office, displays of train whistles, bells, lanterns, signal lights, and photos help explain the dramatic impact the railroad made on the area. The depot sits adjacent to the town's trademark arrowhead monument.