[Fig. 14] Linville Gorge was first designated a wilderness area in 1951, making it the first wild area established east of the Mississippi. With the signing of the Wilderness Act of 1964, the 7,575-acre tract became one of the original components of the National Wilderness Preservation System. In 1984, the North Carolina Wilderness Act increased its size to 10,975 acres. Pristine and unspoiled, the Linville Gorge Wilderness Area remains much as it was when the Cherokee lived here.

As with other wilderness areas, many human activities are prohibited, such as road building, timber harvesting, commercial enterprises, use of motorized vehicles, and bicycling. Trails are not blazed or marked, but the area is popular enough that many trails are easy to follow. Nevertheless, compass and maps are a necessity here, and permits are required for overnight camping. Day hiking does not require a permit.

Many overlooks along the Blue Ridge Parkway spotlight the peaks and unusual formations along the eastern rim of the gorge—the Chimneys [Fig. 14(18)], Sitting Bear Rock, Table Rock [Fig. 14(16)], Hawksbill, and Gingercake mountains—but here they become destinations. The interesting names of formations and trails are often based on Cherokee legend, such as Lettered Rock Ridge which refers to the letters or markings painted by the Cherokee on a rock at the turnoff point to the Table Rock, their mystic altar for sacred ceremonies. Several of these rock formations along Jonas Ridge provide opportunities for beginner, intermediate, and advanced rock climbing.

The area offers 39 miles of trails. The 11.5-mile Linville Gorge Trail [Fig. 14(7)], the longest trail in the wilderness, follows the river from below Brushy Ridge near the falls to the wilderness boundary near Shortoff Mountain and Lake James; elevation at its lowest point is 1,300 feet. Along the way the trail passes through hardwood forest, rhododendron and mountain laurel, wildflowers, huge rocks and boulders, cascades, and sheer, rugged cliffs where peregrine falcons have been spotted nesting. Once the steep inclines have been negotiated, there are long stretches of riverside hikes and secluded camping sites. Through-hikers should expect a strenuous hike lasting at least two days and must secure a permit for overnight stays between May 1 and October 31. 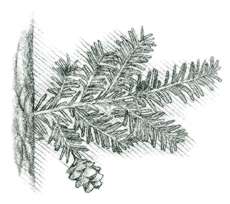 Seven connecting trails on the western rim and two on the eastern allow hikers to make shorter loop hikes. Devil's Hole Trail [Fig. 14(8)], for example, connects with Linville Gorge Trail; it can be accessed from the parking space off Gingercake Acres Road (SR 1265, which turns into FR 210). After an initial ascent, Devil's Hole Trail drops 1,160 feet in elevation on its way through a cove of rhododendron, hemlock, and oak. At 1.5 miles into the hike, after crossing a stream with rocky areas, the trail climbs a cliff top before descending to the river. Cautiously rock-hop or wade across the Linville River to connect with the Linville Gorge Trail, or backtrack for a total hike of 3 miles.

Shortoff Mountain Trail [Fig. 14(22)] is also part of the Mountains-to-Sea Trail [Fig. 14(14)] (see Mountains-to-sea trail). Brushy Ridge Trail [Fig. 14(2)] is a moderate hike of 4 miles round-trip that will satisfy those looking for an isolated hike that does not connect with other trails in the wilderness. Access the trailhead off Old Gingercake Road or SR 1264. (Because trails in the wilderness are unblazed and unmarked, it is imperative that hikers use an official map with explicit instructions and a compass.)

The first mile of Brushy Ridge Trail uses an old forest road for easy hiking before descending toward excellent views of the gorge. A little farther down, along a rocky stretch, spectacular vistas of Hawksbill, Table Rock, and Babel Tower come into view. Canadian hemlock and Eastern hemlock line the dense, rocky trail; at the 2-mile point, backtrack to the trailhead.

Not surprisingly, the gorge is rich in wildlife. Old-growth forest of hickory, oak, maple, locust, and poplar with pockets of fir and Carolina hemlock, four species of rhododendron, orchids, wild indigo (Baptisia tinctoria), and yellowroot (Xanthorrhiza simplicissima) grow here, providing cover and food for the white-tailed deer, raccoons, skunks (Mephitis mephitis), and the occasional black bear. However, some areas at higher elevations dominated by massive rock formations of granite and quartzite are devoid of vegetation other than the most hardy lichens and mosses.

Sections of the river contain rainbow (Oncorhynchus mykiss) and brown trout (Salmo trutta), and butterflies and birds are numerous, as are lizards. Snakes are also found in the gorge, including timber rattlesnakes (Crotalus horridus) and copperheads (Agkistrodon contortrix), the only two poisonous snakes in the mountains of Western North Carolina. The wilderness area is a haven for many varieties of warblers, the pileated woodpecker (Dryocopus pileatus), Eastern phoebe (Sayornis phoebe), white-breasted nuthatch, cedar waxwing, scarlet tanager, and indigo bunting. Hawks and vultures soar above the gorge.

[Fig. 14(16)] The ancient quartzite of the Grandfather Mountain Window provides this area of North Carolina with some of the most diverse and exciting multipitch rock-climbing sites in the United States. And with its variety of overhangs, hand and foot holds, vertical walls, and low-angle slopes, Table Rock Mountain is considered by many climbers to be one of the best—especially for beginning and intermediate mountaineers. The Cherokee also revered the Table Rock, which served as a mystic alter for their sacred ceremonies.

Viewed from numerous overlooks along the Blue Ridge Parkway, the 3,909-foot summit appears to be as flat as the tabletop its name implies. But in fact, it is slightly tilted, and the surface, irregular rather than smooth, is a melding of huge boulders. The sandy, dry soil produced from quartzite erosion is not nutrient rich, but the hardy plants that take root at the rock's top, including Allegheny sand myrtle, mountain laurel, blueberry, pine, and various sedges, use it to brace themselves against the heavy gusts of wind that are an everyday part of cliff-dwelling life.

A short trail leading from the parking area to the summit snakes through several narrow passageways before breaking out onto a panoramic, 360-degree view. It's an ideal place for watching the hawk migration in September.