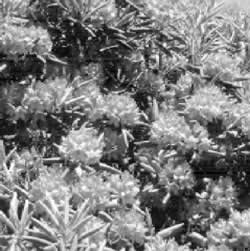 The Great Smoky Mountains National Park [Figs. 42–47], though geographically part of the Blue Ridge province, is a world unto itself. Maybe this land was always extra blessed with wildlife and breathtaking terrain (hosting 17 peaks with elevations of 6,000 feet or higher), but more likely its elevated status stems from the fact that more than 520,000 acres have been protected from man's continuing intervention. As a result, visitors can enjoy 110,000 acres of old-growth forest, 1,600 species of flowering plants, 2,000 different fungi, 300 kinds of mosses, 200 varieties of birds, 60 species of fur-bearing mammals, 48 types of fish, 38 species of reptiles, 27 kinds of salamanders, and 12 endangered species. Of particular note, approximately 500 black bears live in the park, and their presence should be a consideration throughout any visit.

The geology of the region varies, too, from the lands east of the park, although the basic formation process was the same. First came the periods of continental collision and mountain building in which sedimentary rock layers hundreds of miles in length and 40,000 feet deep became folded, broken, and overturned; then, millions of years of erosion followed up through today. The total acreage of the park is divided between North Carolina (276,063 acres) and Tennessee (244,345 acres), and it is primarily in Tennessee that some variations in the geologic makeup begin to appear. Of the three basic bedrocks found in the park, the Precambrian basement rock, more than 1 billion years old, consists chiefly of schists, gneisses, and some granitic rocks. The late Precambrian rocks of the Ocoee Series, however, ranging in age from 500 million to 1 billion years, are dominant in the park and include more sedimentary, less metamorphosed rocks such as shales, slates, and sandstones in the northwestern areas of the park. Finally, the sedimentary rocks of the Valley and Ridge, deposited during the Paleozoic Era and only 300 to 500 million years old, are found primarily in the westernmost portions of the park.

Fossils are also somewhat more prevalent here, because fossils usually occur in sedimentary rock younger than 600 million years that has not experienced metamorphism. Most of Western North Carolina, and the Blue Ridge province, is composed of metamorphic and igneous rocks, which limits the numbers of fossils dramatically.

Weathering and erosion over millions of years have reduced the Blue Ridge Mountains to only a shadow of their original grandeur. One particularly interesting effect of this erosion lies in the Cades Cove area where, as in the Grandfather Mountains Window in the Black Mountains section, layers of younger Paleozoic limestone underlie the older metamorphosed rock. This resulted when ancient upheavals and collisions thrust the younger rock underneath the older, and over millions of years the older rock has worn away to open "windows" into the layers of younger rock.

Weather systems that collide with the southern Appalachian Mountains also work to create a number of unique wildlife ecosystems. The exposed peaks are subject to tremendous winds (up to 100 mph) and excessive precipitation each year. Moisture is greatest on the southwest slopes, where rainfall arriving from the Gulf of Mexico first encounters the mountains. A similar situation occurs in the south-oriented Blue Ridge Escarpment, where Atlantic coast moisture is dumped among the mountains of Georgia, North Carolina, and South Carolina.

The other climatic influence on the region, that of temperature, relates to latitude and, once again, geology. In low-lying areas, the warm southern temperatures encourage plants normally found in Piedmont and Coastal Plain provinces. On the other hand, at higher altitudes in the park the temperature can be as much as 15 degrees Fahrenheit cooler, reflecting an average decrease of 3 degrees Fahrenheit for every rise of 1,000 feet in elevation. In the Smokies, land at high altitudes harbors species more typical of northern latitudes.

No one questions that the park is a national treasure. On the contrary, the real problem is too many visitors and not enough money in the budget. New ideas are being developed to help finance much-needed improvements and expanded programming required to serve the 9.3 million visitors who came in 1996 alone (more than double the number of visitors to the Grand Canyon). Careful planning and appropriate funding are vital to keeping the park truly the Great Smoky Mountains.

The park offers an outstanding network of facilities for camping, picnicking, information, and the general welfare of visitors. Not every facility can be covered within this section—only those that are located close to trails and attractions being described. No hunting is allowed in the park; fishing of nonnative fish (no brook trout fishing) is allowed and requires either a Tennessee or North Carolina permit. For more information, consult the park's newspaper, Smokies Guide, available for $.25 at all visitor centers or contact the National Park Service, 107 Park Headquarters Road, Gatlinburg, TN 37738. Phone (423) 436-1200. Web site www.nps.gov/grsm/homepage.htm.