[Fig. 43(10), Fig. 44(2), Fig. 47(1)] For thousands of years, Cades Cove was a hunting and gathering territory for the Cherokee. They called it Tsiyahi, or "place of the river otter." Around 1818 the first European settlers migrated to the 20-square-mile valley. Six generations made their homes here, many in log cabins constructed with the abundant tulip poplar. The Paleozoic limestone of the cove is several million years younger than the rock in the surrounding mountains, and the weathering of this limestone yielded fertile, deep soils ideal for farming.

In 1934, Cades Cove became part of the Great Smoky Mountains National Park. Like the Cherokee before them, cove residents were forced to move. Though just a few log houses, outbuildings, and churches remain of the Cades Cove community, the black walnut trees (Juglans nigra) that settlers planted in their front yards still hold their ground. The diverse habitat of the cove, including 4,500 acres of open meadow, forested slopes, caves, and underground springs, supports abundant wildlife. At sunup, on a drive around the 11-mile loop road, it is possible to see as many as 200 white-tailed deer. The nocturnal bobcat (Felis rufus), though seldom seen, is still common in the cove, as is the native gray fox (Urocyon cinereoargenteus).

The black cherry tree is the favorite fruit of another cove dweller, the American black bear. Other animals include the endangered red wolf (Canis rufus) (see Red Wolf), striped skunk (Mephitis mephitis), and a wide variety of shrews, moles, and mice. There are several different species of snakes in the cove, and many bats can be found in the abundant caves, which have controlled public access.

As the seasons progress, abundant native flora brighten the meadows and woods. Some species in the cove are rare elsewhere in the park. Among them are swamp dewberry (Rubus hispidus ) and the buttonbush (Cephalanthus occidentalis).

Cades Cove Nature Trail. Easy, self-guiding trail located 1 mile past the Abrams Falls turnoff around the loop road. Brochures available at the head of the trail.

Gregory Bald. A more challenging trail beginning at the end of Forge Creek Road (a side road next to the Cades Cove Visitor Center). Traverses several acres of old-growth forest and climbs 5,000 feet to a 10-acre grassy bald. Trail is 10 miles round-trip with a 3,000-foot elevation gain.

Spence Field. Trail starts at the back of the Cades Cove picnic area. This difficult hike is 11 miles round-trip and climbs to about 3,000 feet. At the top of the trail, a left turn onto the Appalachian Trail leads to Thunderhead Mountain.

[Fig. 43(9)] Located in the Cades Cove area of the park, Abrams Falls Trail offers access to the beautiful falls and a walk through the Cades Cove geologic window. Throughout the Cades Cove valley, layers of younger, Paleozoic limestone underlie older metamorphosed rock, a result of ancient upheavals and collisions that thrust older rock over younger rock. Over millions of years, the older rock that forms the area's rugged landscape has been worn away by erosion, opening up "windows" into the layers of younger rock.

Abrams Falls Trail follows Abrams Creek, which flows with a strong volume of water. Approximately 2.5 miles into the trail, a short spur trail leads to Abrams Falls, where the stream is broad and robust as it plummets 20 feet over massive beds of Cades sandstone to a 100-foot-wide plunge pool below. Along the route, Arbutus Ridge, named for the abundant trailing arbutus here, provides scenic vistas and a look at the sandstone bedrock riddled with vertical cracks, or joints, as geologists call them. The thin or nonexistent soil that results from the flow of groundwater through these joints supports little plant life. 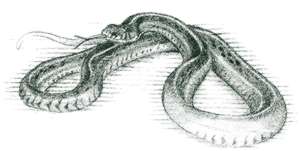 Not far away, though, rhododendron and mountain laurel begin to get a foothold, forming thick tunnels in some places. These magnificent evergreens, abundant in the mountains and best noted for their extravagant blossoms in late spring, serve a valuable role in maintaining thin soil cover. While their root systems help hold the soil, their thick, waxy leaves protect it from damaging winds and heavy rains.

The creek and falls are named after the Cherokee chief, Old Abram, who lived near the mouth of the creek. He and other chiefs were killed by a young soldier who was avenging the massacre of his family, though it was the Creeks and not the Cherokee who were to blame.

Sadly, there are other stories of man's inhumanity connected to the Abrams area. As recently as 1957 it was determined that "trash" fish, i.e., those that man cannot fish recreationally, should be poisoned to make room for the prized, nonnative rainbow trout. The poison Rotenone was dumped in a 15-mile section of Abrams Creek, killing 31 species of fish. A recovery effort began in 1980, especially of a unique species of catfish called madtoms, and today there is some cause for optimism.

River otters (Lutra canadensis) were also the victims of man's overtrapping and logging, which destroyed their habitats and extirpated these graceful creatures from the region. For 50 years the streams were void of otters, until 1986 when 11 otters were reintroduced to Abrams Creek; additional otters were later introduced into the Little River and other streams in North Carolina as well. As reintroductions show slow but steady success, river otter populations are growing once again.

Bird-watching in the Cades Cove Area is particularly rewarding (see Cades Cove). In addition to the birds found generally in the cove, Abrams Falls is a good site for northern parula (Parula americana), Swainson's warbler, and yellow-throated warbler (Dendroica dominica).

For a longer hike, Abrams Falls Trail continues past the falls for almost 2 more miles to connect with the Hannah Mountain and Hatcher Mountain trails.