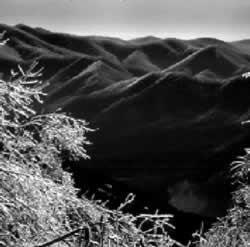 The Natural History of the North Carolina Mountains

The overriding influence on the natural history of the southern Appalachians is its long and complex geological past. Estimated to be 500 million years old, these are some of the oldest mountains in the world. They are ten times older than the Rockies, Sierras, and the Andes. Moreover, the basement rock here is more than 1 billion years old. Written within the formations comprising our mountains is a history of geologic events that indicates an astonishing series of continents clashing and splitting apart, of major periods of mountain building and erosion, and the creation and subsequent filling-in of valleys.

These mountain-building events took place between 500 and 250 million years ago [Fig. 2A]. Most modern geologists believe that parts of the continent then made of Europe and Africa collided with the east coast of the North American continent, and then separated from it, two different times. When the two continents separated the second time, the Atlantic Ocean was formed.

The second collision, approximately 290 million years ago (during the Permian period), was the event that produced the beginning of today's mountain topography. It was this collision, lasting for another 50 million years, that caused faulting and folding, resulting in an upheaval of mountainous terrain from Maine to Georgia. Here in the southern Appalachians this terrain has the appearance of accordionlike folds that parallel each other in a southwest to northeast direction for hundreds of miles. Millions of years of erosion have produced the soft peaks and rounded hills that we see today.

Interestingly, when the continents collided, older rock material was shoved up and over younger material. These older surface rocks are primarily composed of layered metamorphic rocks (compact and crystalline rock created by pressure, heat, and water) called gneiss and schist. These rocks were formed from the compression of other rocks, such as granite, basalt, and sandstone.

The southern Appalachians contain great mineral wealth. Rocks are made of minerals, and nowhere on this continent is there a greater variety of minerals, including many of great economic value such as mica and feldspar. Mineralogists who have studied the southern Appalachians have identified more than 300 different minerals there, including precious metals such as gold and silver, as well as garnets, sapphires, rubies, and emeralds. The first mineral to be mined, though, was mica. In earlier times, large sheets of it were used in stoves and as window coverings.

The Natural History of the North Carolina Mountains Outline