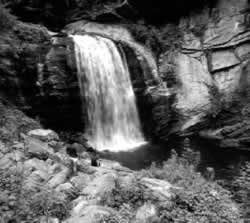 The natural history of the North Carolina mountains—their geology, rocks and minerals, plants and animals—is not only varied but represents a storehouse of natural treasures to be savored by all those who enjoy the outdoors and are interested in learning about it. When the first naturalists visited the North Carolina mountains, they stood in awe. Never had they witnessed such variety in plants and animals. Never had they seen so great a variety of topographical features and complicated geological formations in such a relatively small geographic area. These early explorers of the southern Appalachians made vast collections of animals, plants, rocks, and minerals, many rare and unique to Western North Carolina and some that had never before been discovered.

Among the first naturalists to study this rich collection of plants and animals was André Michaux, a Frenchman whom Thomas Jefferson described as the best-trained naturalist to enter the American continent. In the late 1700s, he and his son, François (who later became equally respected for his botanical expertise), traveled throughout the Carolinas.

In the mountains, they discovered a new plant, Shortia galacifolia, which grows nowhere but in the Appalachians. Shortia, also known as oconee bells, resembles the much more common galax (Galax urceolata). Both plants have rounded, leathery, shiny leaves, but Shortia has much bigger and more beautiful bell-shaped flowers in the early spring. André Michaux collected only one specimen of this species, and not until much later was it found again in the wild. The specimen he collected was later discovered in a Paris museum by another famous Carolina mountain explorer, Asa Gray of Harvard University. Gray remains America's best-known botanist, largely because of his botanical textbook, Gray's Manual of Botany, still used in colleges today.

More important to American botany—especially for the Carolinas—was the work of John Bartram and his son, William. The latter's Travels Through North and South Carolina (Philadelphia, 1791) was the most complete published account of the natural history of the North Carolina mountains at that time. William Bartram may have been the first naturalist to explore and then describe in detail the plants and animals at the higher elevations.

Other early naturalists to visit this area, at least briefly, include John James Audubon; John Bachman, after whom the Bachman's warbler (Vermivora bachmanii) is named; and Peter Kalm, whose name is used for the genus of mountain laurel, Kalmia. Following these early naturalists into the mountains were John Fraser, for whom Fraser fir (Abies fraseri) is named; Moses Ashley Curtis in 1830 and 1854; Samuel Botsford Buckley in 1842; and Lewis Reeve Gibbs in the 1850s. Of even greater note was Elisha Mitchell, after whom the tallest peak east of the Mississippi was named. Mitchell was a scientist, educator, minister, and professor at the University of North Carolina at Chapel Hill with a keen interest in mountain geography and geology.

Today, naturalists working in Western North Carolina still find it a fascinating place because of the rich diversity of plants and animals. There are many reasons for this, including the region's unique geologic past, climate, and uninterrupted forests. A paucity of human development, when compared with other areas of the country, is an important consideration as well.