Once known as the Moonshine Capital of the World, Cosby sits at the northeastern corner of the GSMNP. On the first Sunday in May, the annual Ramp Festival brings thousands to this tiny community to celebrate the potent oniony-tasting ramp (Allium tricoccum) roots, an experience deemed quite noxious by those who haven't acquired the taste.

The Schilling Family Folk Life Center hosts festivals with traditional mountain music and dancing throughout the year in addition to making and selling dulcimers, publishing books, and releasing recordings of mountain music.

Located at the northern entrance to the GSMNP, Gatlinburg is a favorite mountain getaway for millions of visitors headed for the park. Gatlinburg began to attract tourists when Andy Huff built the Mountain View Motel in 1916, before the formation of the park.

Although thousands of overnight accommodations are available, none have been welcoming visitors longer than Le Conte Lodge, high atop Mount Le Conte. Founded in 1926 by Jack Huff, the lodge is only accessible by five hiking trails ranging from 4.9 to 8.9 miles one-way. Your accommodations are less than deluxe, there's no electricity or running water, but the sunsets from Cliff Top and the sunrises at Myrtle Point are legendary.

The Buckhorn Inn is one of Gatlinburg's few remaining historic inns. Built in 1938, the Buckhorn is nestled on 40 acres overlooking Mount Le Conte on Tudor Mountain Road.

Since 1950, Gatlinburg has been the site of an Annual Wildflower Pilgrimage, which is now the largest and best known of the walks in Tennessee. Trip leaders direct motorcades of up to a dozen autos to prime viewing areas in late April each year. During Pilgrimage weekend, wildflower enthusiasts gather for nature walks, bird walks, wildflower sketch walks, propagation workshops, slide shows, and photographic tours.

Gatlinburg has a craft tradition born of necessity and supported by the first national sorority for women, Pi Beta Phi. Pi Beta Phi established the Arrowcraft Shop in 1926 to provide a market to the outside world for mountain handicrafts. The Arrowcraft Shop continues to sell the handicrafts of members of the Southern Highlands Craft Guild, an association of fine craftsmen. The Arrowmont School next door was also founded by Pi Beta Phi in 1912. Once the source of public education for the children of Gatlinburg, the school grew to include crafts instruction and offers summer classes ranging from woodturning to weaving, pottery, and basketry. 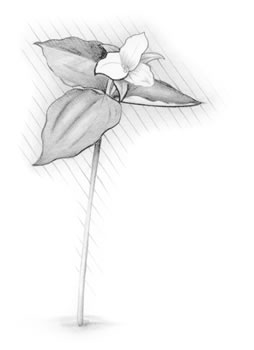 The Gatlinburg crafts tradition continues in the Smoky Mountain Arts and Crafts Community off US 321 east of town.

Known, at least for a while yet, as the quiet side of the Smokies, Townsend is closest to Cades Cove and the Western Foothills Parkway. Several national franchise motels join hundreds of cabins and campsites in welcoming visitors to Townsend, the western gateway to the Smokies.

The Little River Railroad Lumber Company Museum is a very good place to learn more about the history of logging and railroads in the Smokies. The Shay engine sitting out front is typical of the geared steam locomotive engines used to haul timber down the steep mountain grades.

The Richmont Inn Bed and Breakfast is a modern construction inspired by the cantilevered barns found in areas like Cades Cove. A few miles from the entrance to the Western Foothills Parkway north of Townsend, the Inn at Blackberry Farm offers deluxe accommodations, dining, and recreational activities ranging from swimming and cycling to hiking and trout fishing on 1,100 acres in the shadows of the distant high peaks of the Smokies. Many visitors come to Townsend to enjoy the Spring Festival and Wildflower Celebration in April or Old Timer's Day in late September.

The town of Cherokee stretches along US 441 south of the GSMNP within the 56,000 acres of scattered tracts that make up the Qualla Boundary, home of the Eastern Band of the Cherokee.

The removal of most of the Cherokee from their ancestral homelands in this area was hastened by the discovery of gold on Cherokee land in northern Georgia in 1828. Georgia annexed Cherokee lands, sold lots by lottery to whites, and removed all legal recourse for the Cherokees who took their grievances to the United States Supreme Court.

Although the court supported the suit of the Cherokee, Georgia persisted, and the federal government based its course of action on a treaty agreeing to removal that had been rejected by the Cherokee people in October 1835. On May 26, 1838 the arrest and removal of the Cherokee began. Nearly 4,000 of the 16,000 Cherokee who traveled to lands west of the Mississippi River on the Trail of Tears died along the way.

Some 1,000 Cherokee fled to the high reaches of the Smokies with their chief, Yonaguska. The outdoor drama held each summer in Cherokee, Unto These Hills, tells the story of what happened next. An older Cherokee named Tsali killed a soldier while defending his wife. Gen. Winfield Scott, who was in charge of the removal, struck a deal. Tsali would face execution, but the pursuit of the Cherokee holdouts in their remote mountain hideouts would cease.

Col. William Holland Thomas, a white trader who had been adopted by Chief Yonaguska as a boy, remained at Oconaluftee to negotiate on behalf of the Cherokee. The Cherokee received compensation from the United States government totaling about $50 each for the lands they lost east of the Mississippi as a result of the removal.

The city of Cherokee is heavily dependent on tourism revenues. To this end, there are more than 1,500 rooms and 2,200 campsites here. The Oconaluftee Indian Village is a re-creation of Cherokee village life before the removal. The Museum of the Cherokee Indian has artifacts, exhibits, and videotape presentations to acquaint you with the history of the Cherokee Nation.

Trout fishing is popular in about 30 miles of streams on the Qualla Boundary and three well-stocked ponds on Big Cove Road outside Cherokee. A $5 daily Tribal Fishing Permit is required and may be purchased at several businesses and campgrounds in Cherokeee. No state license is required.

The Big Cove community is a quiet, pretty area with several campgrounds and the spectacular 120-foot Mingo Falls about 5 miles up Big Cove Road from Cherokee. There's a small sign indicating the 0.25-mile walk to the falls beginning at the parking area beside Mingo Falls Campground.

Bryson City is one of the Western North Carolina towns served by the Smoky Mountain Railway, an excursion train offering round-trip train rides through the foothills of the Smokies.

Bryson City is also home to the historic Fryemont Inn, a National Register of Historic Places property built in 1923 by timber baron Amos Frye. The 37 rooms with private baths are paneled in chestnut, and huge stone fireplaces grace the lobby and the dining room, where the dinner menu features several trout dishes. The long porch is filled with rocking chairs and the inn's exterior is covered with poplar bark. The main lodge is open from mid-April through October. Other historic bed and breakfasts in Bryson City include the Randolph House Country Inn, also built by Amos Frye and open from April to October, and the 1920s Folkestone Inn, open year-round.

Fontana Dam, at 480 feet, is the highest dam in the eastern United States. The construction of the dam began on January 1, 1942, a few weeks after the bombing of Pearl Harbor. Fontana Village was quickly built to house the workers and their families, providing not only housing but also churches, schools, and a hospital. Laborers toiled 24 hours a day, seven days a week for more than two years to build Fontana Dam and provide the electricity needed for Alcoa Aluminum, which produced aircraft components for World War II.

This village evolved into Fontana Village Resort along the shores of beautiful Fontana Lake. Accommodations include historic and modern cottages, an inn with a cafeteria and a restaurant, houseboats, and campgrounds. The AT crosses over Fontana Dam.