[Fig. 3(9), Fig. 9] Just east of the Blue Ridge escarpment, a granite dome rises 600 feet above the valley floor to a height of 2,305 feet. In the morning sun, the smooth surface gleams in sharp contrast to the vegetation below. Geologists call it a monadnock, hikers call it massive, and rappellers dub it matchless.

The origins of Stone Mountain, the central focus and namesake of the 13,500-acre state park (North Carolina's largest) date back 500 million years when sandy, muddy sediments and volcanic lava and ash were deposited, buried, and compressed into rocks. Many upheavals during mountain-making periods followed, pushing these rocks closer to the surface in what geologists call the Alligator Back Formation. The granite that makes up Stone Mountain and its exposures—Wolf Mountain, Cedar Rock, Little Stone Mountain, Buzzard Rock, First Flat Rock, Hitching Rock—developed from magma cooling and crystallizing 400 million years ago. Almost 200 million years later, overlying rocks began eroding, with rivers carrying the resulting sediment eastward to the Atlantic. The pressure over the rock mass lessened, causing it to expand upward and creating lines of fractures and slabs of rock known as exfoliation sheets, which, as they erode, give the mountain its dome shape.

Twenty miles of hiking trails lead across and around the great dome and past natural rock shelters large enough to provide cover from a sudden rainstorm. Other geologic features along these trails include xenoliths and weather pits. Xenoliths, or "foreign rocks," are the remains of older rocks that were invaded by molten rock. When the hot, molten materials did not completely dissolve the surrounding rock, xenoliths formed. At Stone Mountain, they are composed primarily of biotite gneiss and amphibolite, which give a dark cast to the granite, similar to the rocks on Mount Jefferson west of the park. 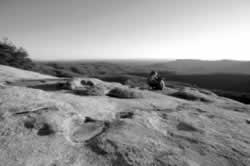 Weather pits, which can give the granitic rock a distinctive pockmarked surface, form when certain minerals weather faster than others and water collects in the depressions; eventually the depressions enlarge and merge. Around these moist depressions, lichens and mosses are established and begin to spread. As they do, they not only loosen tiny rock particles but secrete a mild acid that aids in the chemical breakdown of rock, known as primary succession. Slowly, this process continues until eventually a thin layer of soil forms. Larger vegetation gradually finds a place to root, and over time, a very long time, reforestation occurs.

Stone Mountain has grown in popularity with rock climbers since 1965 when the first party reached the summit by way of the south face. Improvements such as strategically placed climbing bolts and hangers add to the mountain's attractiveness to climbers. Throughout the year, climbers can be observed near the base (which measures 4 miles in circumference) practicing on huge boulders before attempting one of the 13 ascent routes. Sporting colorful names such as Great White Way, The Great Arch, Mercury's Lead, Fantastic, No Alternative, and Grand Funk Railroad, the routes provide access to what many deem the best "friction climbing" in the South. (Friction climbing is a method of rock climbing that involves using the cracks and hollows discovered along the smooth surface for footholds.)

As the interconnecting hiking trails wind through the park, they pass through a number of habitats: dense woodlands, small streams, grassy meadows, mountaintop, and three waterfalls on Big Sandy Creek (Stone Mountain Falls [Fig. 9(14)], Middle Falls [Fig. 9(13)], and Lower Falls [Fig. 9(19)]). With so many habitats for both Piedmont and mountain species, Stone Mountain Park harbors abundant wildlife, earning it the designation of National Natural Landmark. Woodlands in the valley, with their yellow-poplar, hickory, birch, Fraser magnolia, and Eastern hemlock growths, are typical of the cove hardwood forest. Higher elevations feature chestnuts and scarlet oaks (Quercus prinus and Q. coccinea) with an understory of shrubs such as blueberry (Vaccinium) and mountain laurel. As the soil layer thins, the line between the rock and the trees becomes more pronounced with only lichen, mosses, and ferns clinging precipitously to the sheer, rocky surface.

Birds are plentiful in the park and include scarlet tanager, American woodcock (Philohela minor), whip-poor-will (Caprimulgus vociferus), ruffed grouse (Bonasa umbellus), Eastern screech owl (Otus asio), wood duck, and wild turkey. Wild turkeys were once so abundant in Western North Carolina that, according to legend, the Cherokee would only allow their children to hunt the animals because the turkeys posed no threat. European settlers had an easy time of it as well, until the turn of the century when few turkeys remained due to years of unregulated hunting and habitat destruction. Restoration efforts by the North Carolina Wildlife Resources Commission have reversed this trend; wild turkey populations reached more than 30,000 statewide in 1992. Other interesting fauna roaming the park include an occasional sure-footed wild goat, white-tailed deer, box turtles (Terrapene carolina), and a number of salamanders.

Big Sandy Creek, Widows Creek, Garden Creek, and parts of Stone Mountain Creek are classified Wild Trout Waters. This classification refers generally to all waters that naturally support wild trout. Restrictions vary with each stream. Here the there are limits to the number of fish that can be taken, and only artificial lures with single hooks are allowed. Other designations such as Hatchery-Supported Trout Waters apply to waters such as the East Prong of Roaring River that are stocked throughout the fishing season. Regulations on Wild Trout Waters vary but include catch and release, fly-fishing only, artificial lures only, and natural bait allowance. A total of 17 miles of trout waters flow through the park.