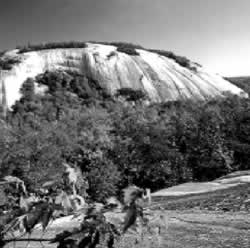 Much of the Grandfather Mountains section [Fig. 3] lies in the valley of the New River, North America's oldest river and one of the world's few north- flowing rivers. From its headwaters in Watauga County, the New River courses through a portion of the Blue Ridge province in North Carolina and Virginia where the terrain rises and falls from low ridges and mountains with elevations of only 1,200 to 3,000 feet. Within this section, however, dramatic change begins. The province starts to widen, gradually expanding from its narrow 15-mile width near the Virginia/North Carolina border to its 140-mile width along the borders with South Carolina and Georgia. As the province moves south, the modest peaks of the plateau become the highest points east of the Mississippi. Near Virginia, for example, elevations reach only 2,885 feet at the summit of Cumberland Knob [Fig. 5], but heading south along the Blue Ridge Parkway [Fig. 4], Bluff Mountain within Doughton Park [Fig. 6] rises to 3,800 feet and E. B. Jeffress Park [Fig. 4(4)] reaches almost 3,600 feet. Farther south, the Blue Ridge province reaches its highest point in the Black Mountains at Mount Mitchell, 6,684 feet.

The complexity of the geology of the mountains in North Carolina is well illustrated in the curious patterns of the rivers. The New River, for example, and all the other Gulf-bound rivers in North Carolina's mountains make their way to the Mississippi through the Unaka chain that is generally 1,000 feet higher than the Eastern Continental Divide along the Blue Ridge crest. According to one theory, these rivers are able to defy gravity because they carved through the younger Unaka ranges faster than the Unakas were uplifted during periods of mountain making. The other major river in this section, the Yadkin River, also rises in Watauga County but runs its 203-mile course to the Atlantic by joining the Uwharrie River and later the Pee Dee River.

Other geologic wonders can be found in this section in three of the mountain region's five state parks. East of the Blue Ridge escarpment, the Stone Mountain monadnock rises an imposing 1,600 feet above the valley floor to an elevation of 2,305 feet. Mount Jefferson State Natural Area [Fig. 8(4)] and New River State Park [Fig. 7] feature numerous recreational activities.

Like most of North Carolina's mountainous regions, the Grandfather Mountains section hosts rich forests and abundant wildlife, but 10-foot-wide stumps along the forest floor tell a sadder story—the devastation of the once-glorious American chestnut (Castanea dentata) tree. At the turn of the century, the chestnut blight arrived in New York, making its way south over the next three decades. By the 1930s, the blight had infected almost 90 percent of the chestnut trees in Western North Carolina, eventually killing them all. As a result, the mountains were dramatically altered. Species dependent on the chestnut for food and housing were reduced, and new plant growth took over in areas once shaded by the mighty chestnut canopy. Oaks and hickories now dominate these forests, although young chestnut trees still sprout from the massive root systems unaffected by the blight. They grow as large as 4 inches in girth and bear nuts, but, regrettably, they, too, will eventually succumb. Genetic research and efforts to cross the American chestnut with the Chinese chestnut (Castanea molissima), which is resistant to the blight, continue, and some scientists report promising results from this hybridization.

The mountains formed natural barriers that meant isolation and hardship for generations of settlers until good roads made their way deep into the coves and valleys. One of the oldest roads through this section was the Old Buffalo Trail established by the heavy hooves of the buffalo that roamed the land. Later, the trail developed into Daniel Boone's Wilderness Road that led the way west into Kentucky.

For all this talk about isolation and hardship, there are benefits from the struggle. It drove these self-sufficient settlers to turn the abundant natural resources into tools and toys, clothes and coverlets, furniture and fiddles. Their desire to create things of beauty led settlers to put the finishing touches on these objects, and by the time the railroad carved its way into the mountains in the late nineteenth century, they had perfected their craftsmanship into what is now considered a prized American artform. Isolation also caused this area to be dubbed the "Lost Province," a phrase that makes some residents bristle. Looking back, though, it was this very remoteness, at least in part, that saved the area's pristine countryside from development, maintaining its natural beauty and earning the area a new—and coveted—moniker of "Unspoiled Province."