[Fig. 19, Fig. 20(3)] In 1924, the F. J. Torras Causeway was completed to St. Simons Island, and today makes the island one of only four Georgia barrier islands connected to the mainland. From Brunswick, the causeway crosses 4 miles of marsh and five tidal rivers. The high spans over the Mackay and Back rivers provide a fantastic view of the marshes of Glynn. The causeway joins the island at Gascoigne's Bluff on the Frederica River. This section was the site of nineteenth century lumber mills. On the right is Golden Isles Marina Village, and on the left are Gascoigne Bluff/Epworth Methodist Center and St. Simons Boating and Fishing Club. In the river across from the religious center are three marsh islands, created from ballast stones unloaded in the river from European vessels that would then fill their holds with cotton or lumber for the Old World. Over time, the rocky mounds have filled with soil and developed into marsh islands, supporting saltcedar (Tamarix gallica), an exotic species that resembles red cedar and was unintentionally brought over by the boats.

The 4.3-mile protected bikeway that runs next to the causeway is a glorious way to view some of the most superlative salt marsh on the entire Atlantic coast. The spans above the Mackay and Back rivers are two of the few "hills" cyclists will encounter on the coast, but the view is worth the effort. Besides, after enjoying the panorama from a 65-foot high bridge above the MacKay River, cyclists can coast down the other side.

From dugout canoes to million dollar yachts, Gascoigne's Bluff has moored many a ship seeking safe harbor at St. Simons Island. Found here today are two marinas that serve the Intracoastal Waterway—Golden Isles Marina Village, a complex of marina offerings on a marsh island off the causeway, and the quieter St. Simons Boating and Fishing Club, located on the bluff. Golden Isles Marina has floating docks, gas and oil, showers, laundry facilities, food and drinks, marine supplies, hardware, boat repair, and overnight and long-term dockage. Restaurants with a marsh view (Dockside Grill & Raw Bar, (912) 638-4100, St. Simons Brewing Company, (912) 638-0011) and shops are within walking distance. Here you will see everything from luxurious yachts to shrimp boats. The marina hosts the annual Golden Isles Kingfish Classic each summer, which draws hundreds of anglers. 206 Marina Drive (St. Simons Island Causeway). (912) 634-1128. St. Simons Boating and Fishing Club on the west side of the island at Gascoigne's Bluff has gas and oil, food and drinks, electric hoist, bait and tackle, and overnight and long-term storage. 1000 Arthur Moore Drive. (912) 638-9146. 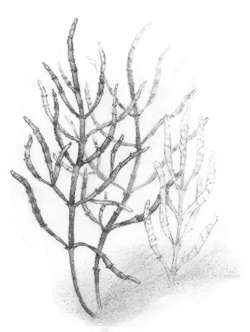 Gascoigne's Bluff/Epworth By The Sea

[Fig. 20(4)] This beautiful bluff at the foot of the causeway where it meets St. Simons Island has seen more than its share of history. It has been an Indian settlement, the site of the most beautiful plantation on the island, the headquarters of a Spanish invasion, the source of timber stocks that were used to build the first ships of the U.S. Navy, and today a Methodist Conference Center.

Oaks, cedars, and shrubs dominate the bluff, who features a small park and Epworth By The Sea Methodist Conference Center. The area is open to the public, which can tour the beautiful woodlands, gardens, slave cabins, and Methodist retreat and museum. A Georgia champion southern red cedar (Juniperus salicicola) is found here, with a 15.5-foot circumference, 60-foot height, and 74-foot crownspread. Bird watchers should look for gray kingbirds during the summer and white ibis during winter.

Originally an Indian settlement, Gascoigne's Bluff, pronounced "Gas´ co-neeze," was named for Captain James Gascoigne, commander of the man-of-war Hawk, which convoyed the two ships bringing settlers to Fort Frederica in 1736, including John and Charles Wesley and German Salzburgers and Moravians. Gascoigne established the headquarters for Georgia's naval forces here along with a plantation. It was at this site that Spaniards landed during their unsuccessful invasion of Georgia during the War of Jenkins' Ear in 1742.

Today, the bluff has many beautiful old Live Oaks, but none as old as the ones that were cut on the island in 1794 and sent to shipyards in the North to build the first vessel of the U.S. Navy. Trees that grew near here supplied the sturdy lumber used in the famed American warship, USS Constitution, or Old Ironsides. When the ship was restored in 1927, many of the original live oak timbers were considered sound enough to last another half century.

During the plantation era, this area had a wharf that was part of the sea island plantation of Charleston merchant James Hamilton. Developed in 1793, the plantation was described four decades later by Fanny Kemble as "by far the finest place on the island." Two tabby slave cabins remain from this period, and were given to the Cassina Garden Club in 1931. Placed on the National Register of Historic Places in 1988, the two structures are probably the best examples of slave quarters on any of Georgia's developed islands. (Another slave building is located on the Epworth By The Sea property.)

From 1874–1902, several great sawmills lined the bluff, cutting raw cypress and longleaf pine logs into timber, which was loaded onto boats and shipped to all parts of the world, including New York, where timber cut here was used to build the Brooklyn Bridge. The ballast islands located off the bluff are a measure of the amount of naval activity that took place here. A community developed in the area that was called "The Mills" disappeared when Georgia's vast timber stocks were exhausted.

John and Charles Wesley, founders of the Methodist Church, visited St. Simons Island and Fort Frederica in March of 1736. In 1949, the South Georgia Conference of the Methodist Church decided to purchase 43.53 acres of the Hamilton Plantation at a bargain price from the Sea Island Company for a Methodist conference center. Bill Jones of the Sea Island Company supported Moore's efforts because he wanted St. Simons to maintain a family atmosphere. Jones believed St. Simons, like many seaside resorts, was at risk at being overtaken by bars and nightspots, which would hurt the value and status of Sea Island. Jones supported many church building activities believing they would inhibit this kind of growth. Under the leadership of Bishop Arthur J. Moore, a group of nine laymen, including Bill Jones, raised the needed $40,000 to purchase the site. On July 25, 1950, in the style of John and Charles Wesley, Moore preached under the Live Oaks, and named the site "Epworth" for the Wesleys' English village, and "By The Sea" for the coastal surroundings. In 1962, the site was designated an official Methodist shrine. The Arthur J. Moore Methodist Museum and Library opened in 1965 and became the official depository for the conference's archival records.

In 1844, the Methodist church divided into two branches in a dispute over the church position on slavery. The two reunited in 1939 and merged with another church branch in 1968 to become the United Methodist Church. Epworth By The Sea has several historic tabby slave buildings that have endured from the Hamilton Plantation period and are open to the public.

The museum features a mix of St. Simons and Methodist history, including handwritten letters by John Wesley and a life-size wax statue of Bishop Arthur J. Moore. The library has 6,000 volumes that can be used to do historical, genealogical, and scholarly research.

Epworth By The Sea is open to people of all denominations, offering 218 rooms, 12 apartments, 36 meeting rooms, and a banquet hall that can hold 400. There is an athletic field, lighted tennis courts, a youth gym, and two fishing piers.

[Fig. 20(5)] One of the most famous sea island cotton plantations, Retreat Plantation, is today one of the best golf courses in Georgia, if not the U.S. Cotton grown here commanded record prices in Liverpool markets. Course developers were careful to retain much of heritage of the plantation, and visitors can drive the approach and view the breathtaking Avenue of Oaks planted almost 150 years ago. Golf is available to guests of The Cloister (see Sea Island) or members of the club.

The Sea Island Company purchased the property after the King family could no longer support the plantation that flourished in antebellum days, and opened the Sea Island Golf Course in 1929. James Spalding, the man who brought sea island cotton to southern plantations, purchased Retreat Plantation in 1(912) 786. According to Thomas Spalding, his father James grew the first sea island cotton, also known as long-staple, black seed, or Anguilla cotton, in the spring of 1787 "upon the banks of a small rice field on St. Simons Island."

Thomas Spalding, who inherited his father's estate in 1794, built Orange Grove on St. Simons Island, a replica of Oglethorpe's residence of Orange Hall in Fort Frederica. In 1802, Spalding sold the plantation for $10,000 to Major William Page, a friend of Major Pierce Butler, and relocated to Sapelo Island.

The Pages established a productive cotton plantation and became one of the richest families in the South. Page's only daughter, Anna Matilda, married Thomas Butler King, a young lawyer from Massachusetts. Like many other wealthy planters, he spent much of his time on politics, while Anna Matilda continued managing the successful cotton plantation, along with beautiful gardens of roses, specimen trees, rare shrubs, and shell walkways. Many famous guests and statesmen experienced the Page's Southern hospitality, including wildlife artist John James Audubon.

Today, the approach to the excellent 36-hole golf course borders the original oak-lined avenue—a beautiful, sun-dappled green tunnel planted in 1850 by Anna Matilda—that led to the cotton fields located in the area of the airport. Also located on the property are the ruins of a two-and-a-half story, 10-room slave hospital, a tabby barn used as a clubhouse, and a small cemetery used by slaves and their descendants since 1800, including Neptune Small (see Neptune Park). Another relic of Retreat Plantation is a slave cabin located at the corner of Frederica and Demere roads.