During the Civil War, Columbus was an important industrial town, second only to Richmond in the amount of goods it provided to the Confederacy. Located at the northernmost navigable point on the Chattahoochee River, this prosperous industrial town of 15,000 at the time of the War had cannon, munitions, and sword factories; many textile mills which produced uniforms; and the second-largest iron works in the Confederacy. A 1,500-bed hospital was located here as well. The energy of falling water powered textile, grist, saw, and paper mills. Its access to the Gulf through the river and proximity to Deep South cotton plantations, made Columbus a major railroad and shipping center. When Sherman marched on Atlanta in 1864, the Atlanta arsenal was moved to Columbus. All these reasons made Columbus a target of the Union, and on Easter Sunday, April 16, 1865, forces under Gen. James H. Wilson attacked from the west in a rare night engagement. It was the last significant land battle of the Civil War, occurring a full week after Lee had surrendered to Grant, and after Lincoln was dead at an assassin's hands.

Wilson's Raiders were sweeping through the previously untouched industrial belt of the Deep South, located along the fall line through Alabama and Georgia, and looking for a place to cross the Chattahoochee. Wilson sent a brigade to West Point to capture the river crossing there and sent his main force of 11,000 against Columbus. In an engagement lasting a few hours, the town was defended by a hastily gathered force of less than a few thousand, consisting of old men and boys, but by 1 a.m. on April 17, the town had fallen, with approximately a dozen casualties on each side, and 600 Confederate troops escaping toward Macon, then the capital of Georgia. The next day, Columbus suffered the same fate as Atlanta six months earlier, when Union troopers burned all the property of what was considered the last great Confederate storehouse, including more than 100,000 bales of cotton, the Arsenal, Confederate Naval Iron Works, Confederate Quartermaster Depot, Haiman Sword factory, 15 locomotives and 200 cars, 5,000 rounds of ammunition and 74 cannon, and the gunboat Jackson, also known as the Muscogee.

In the 26-block, National Register Historic District of Columbus, the traveler finds historic homes, cobblestone streets, and many old brick buildings along the river which 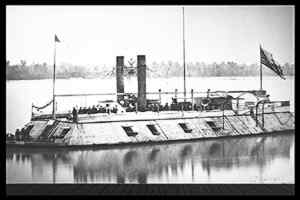 capture the feel of an antebellum industrial center. On Broadway in the historic District, Dr. John S. Pemberton, a captain in the Confederate Army and the druggist who invented Coca-Cola in 1866, operated a pharmacy before the Civil War. His country home was moved to this district. Many plaques and monuments around Columbus mark its rich industrial history. The unique Confederate Naval Museum is a must visit for the Civil War buff, and the Columbus Museum has excellent displays. The historic Linwood Cemetery has two Confederate sections, and Fort Benning has the National Infantry Museum, with many fascinating exhibits from all American wars, including the Civil War. Columbus was the home of Gen. Alfred Iverson, Jr., Gen. Henry L. Benning, and Gen. Paul J. Semmes, two of whom are buried in Linwood Cemetery.

The James W. Woodruff, Jr. Confederate Naval Museum is the national and international clearinghouse of information on the Confederate Navy, in which was the genesis of 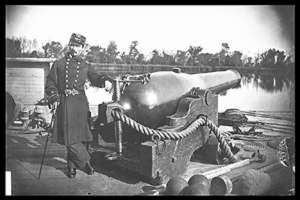 modern naval warfare. At the start of the Civil War, the South, with few shipyards, naval engineers, sailors, or heavy industries, had to improvise to compete with the organized and well-supplied Union Navy.

Museum displays illustrate the development and operation of the naval mine, submarine, and battleship, all of which trace their first practical deployment to the Confederate Navy. Two exterior exhibits display the salvaged remains of two entirely different Confederate warships: The 225-foot long ironclad ram C.S.S. Jackson, and the 130-foot long steam/sail powered gunboat C.S.S. Chattahoochee. Both were sunk in the Chattahoochee River near the War's end. The Chattahoochee, built in 1861-62 at Saffold, Early County, Georgia, was first captained by Cmdr. Catesby ap R. Jones, who is famous for commanding the C.S.S. Virginia, known as the Merrimack, during its famous duel with the U.S.S. Monitor, known as the first battle between ironclad warships and the beginning of modern naval warfare. The Chattahoochee operated on the upper Appalachicola until it suffered a boiler explosion and sunk on May 27, 1863, near Blountstown, Florida. Those killed were buried in Linwood Cemetery in Columbus. The Chattahoochee was raised and taken to Columbus for repairs, and later scuttled on April 16, 1865 to prevent capture by Union forces under Gen. James H. Wilson. The Jackson was built in Columbus, but after the center paddlewheel-powered ironclad's failed launch in early 1864, the vessel was redesigned to a twin-screw arrangement and relaunched on Dec. 22, 1864. The powerful Jackson featured 4-inch thick iron plating backed by two feet of wood, with six large Brooke rifles. Shortly before the ship was finished, it was captured in Columbus by Wilson's Raiders, torched and set adrift, where it floated 30 miles downstream before beaching on a sandbar and burning to the waterline. Both the Jackson and the Chattahoochee were salvaged in the early 1960s.

Built in 1853, originally the Columbus Iron Works and then Confederate Naval Iron Works, this factory was the second largest iron producer in the Confederacy. This factory supplied steam engines, iron cladding, and other parts to all the Confederate shipyards in the South, along with cannon and a wide variety of cast iron products. Today, the restored building, with its old brick walls and huge timbers representing the best of 19th century craftsmanship, is on the National Register of Historic Places and serves as Columbus' convention center, named the Columbus Iron Works Convention & Trade Center. The building is open to the public and has exhibits of machinery, products, casting and armor from the C.S.S. Chattahoochee and C.S.S. Jackson, and the "Ladies Defender," a cannon manufactured from brass cooking utensils donated by the ladies of Columbus. 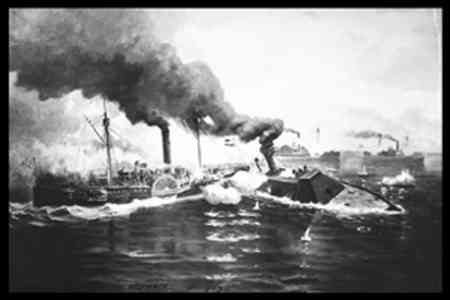 Linwood Cemetery has two Confederate sections — Naval and Army — with the graves of more than 200 soldiers from the Civil War, many of whom died in the several Confederate hospitals located in Columbus from 1862-65. Some buried in the cemetery are casualties from the Battle of Columbus. Others died in a boiler explosion on the C.S.S. Chattahoochee and are buried in the Naval Section, with their graves guarded by one of the rifled guns from the Ironclad Jackson. Maj. Gen. Paul Jones Semmes, a Columbus banker and planter who won glory fighting in the Eastern Theater with Gen. Robert E. Lee, died from a wound to the thigh suffered at Gettysburg while leading his men across "the wheat-field" and is buried here. So is Brig. Gen. Henry L. "The Rock" Benning, a Columbus lawyer and politician who gained respect from his troops for his coolness and bravery during many battles in the Eastern Theater throughout the Civil War. Fort Benning is named for him. Also buried in the cemetery is Brig. Gen. Pleasant J. Philips, who commanded troops at the battle of Griswoldville, Georgia, one of the few actions opposing Union Gen. W.T. Sherman's "March to the Sea."

The National Infantry Museum is considered the finest military museum in the country and is one of the larger museums in the state, displaying more than two centuries worth of artifacts in 30,000 feet of exhibit space on three floors. Its collections run from the 1600s to the present day. From the Civil War, the museum has on display Gen. Ulysses S. Grant's traveling liquor cabinet, Union and Confederate uniforms, a set of Civil War dominoes, playing cards, a painted eagle drum, bugle numerous Confederate flags, a re-creation of Confederate Gen. Henry L. Benning's drawing room, a rare regimental flag from the Union's 2nd Regiment of Colored Troops, and more.

The museum, with its focus on the Chattahoochee River Valley, has many fine exhibits, including one on the significance of the Civil War in Columbus history and a collection of Confederate and Union weapons.