The History of Man in the Smokies

The earliest human inhabitants of this rugged and magnificent cluster of Appalachian Mountains were the Cherokee Indians. The traditional territory of the Cherokee included the Smokies and extended beyond to include much of what is now Tennessee, North Carolina, and north Georgia.

The Middle Cherokee were scattered through the mountains, while Valley Cherokee lived in the foothills to the south, and the most prosperous group, the Overhill Cherokee, lived beyond the mountains in eastern Tennessee.

The Cherokee considered the Smokies a sacred place, the source of many legends, the home of magical creatures and enchanted lakes. Their name for these mountains was Shaconage, meaning mountains of blue smoke. The Smokies later became their refuge.

Their utopia was first interrupted by Spanish explorers who came to America in search of gold and other riches. Some historians believe Hernando De Soto visited the Smokies. The Spanish presence was temporary, but soon afterward fur traders followed game trails through this remote Cherokee country. They arrived as early as 1673, and by 1690 they had established trading posts. Early surveyors establishing the boundary of North Carolina and Tennessee called the peaks we now know as the Great Smoky Mountains, the Iron Mountains.

European migrants began sifting into the mountains and carving out small homesteads. Many of these settlers were of Scottish and English heritage, and they sought out the remote coves and hidden valleys to reside in and lead solitary lives. In 1821 white families moved to Cades Cove, the first area to be settled by whites in the Smokies. Settlers followed them to the Cataloochee Valley in 1836. 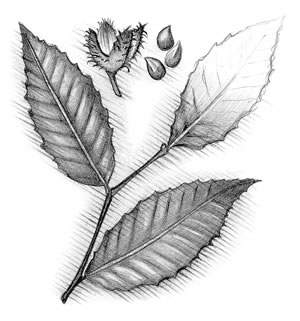 First, there were wars between the Cherokees and neighboring white settlers. Wars followed between whites and whites, and all the while the population in the mountains was growing as more immigrants entered the area.

The major blow to the natural resources was struck when several big timber and paper companies began clearing stands of virgin timber. In the 1880s, the first lumber companies reached the Smokies. Prior to that time, logging had been confined to harvesting black walnut (Juglans nigra), cherry (Prunus sp.), ash (Fraxinus sp.), yellow poplar (Liriodendron tulipifera), and oak (Quercus sp.) along streams and close to sawmills.

The earliest timber-related industry was the acquisition of tanbark for use in curing leather. Large chestnut, oak, and hemlock trees were felled and stripped of bark. The trees were often left to rot because it was too difficult to haul them to the sawmill.

The invention of the Shay locomotive in 1877 provided transportation well suited to steep grades and heavy loads. Soon selective harvesting of a renewable resource was replaced by large scale clear-cutting of every tree that was 12 inches in diameter and 4 feet above the ground.

In the late 1890s, a few farsighted people saw what was happening and began to talk about a public land preserve in the cool and healthful air of the southern Appalachians. A bill to bring this about was introduced in the North Carolina Legislature, but it failed.

The movement to save the Smokies gained momentum, and by the early 1900s, there was increasing pressure on Washington to create some kind of preserve. But at the same time, the lumber industry was gaining strength. In 1901, Col. W.B. Townsend purchased 86,000 acres, stretching from Tuckaleechee Cove near present-day Townsend to Clingmans Dome, for lumbering. In 1910, Parsons Pulp and Lumber Company purchased 25,000 acres from the Eastern Band of the Cherokee. In 1916, Champion Fiber and Paper Company purchased 92,000 acres, including 25,000 acres in Greenbrier Cove. Lumber towns grew up in Townsend, Smokemont, Greenbrier, Fontana, and Bryson City. Railroads were quickly built to areas being harvested, then dismantled and moved to the next location.

Many mountainsides, once blanketed with trees, appeared as a virtual moonscape. And even then, the lumbering continued. It took less than 40 years to essentially destroy the forests of the northwestern portion of the Smokies.

Although about 75 percent of the Smokies' forests had been logged by this time, at least 100,000 acres of old-growth forests remained. It was the largest remaining area of old-growth forest in the eastern United States and an area of unparalleled natural beauty.

With the plan for a park adopted by members of the Southern Appalachian National Park Committee in 1924, competition escalated between two groups of supporters, one in Asheville, North Carolina, and the other in Knoxville, Tennessee, regarding its location. In order to prevent the movement from losing momentum, they agreed on a park in the heart of the Smokies, halfway between the two cities.

The situation in the Smokies was different from President Theodore Roosevelt creating the first national parks in the West. Yellowstone and Yosemite were simply carved out of land already owned by the federal government. In the Smokies hundreds of small farmers and a number of large lumber companies owned the land. The farmers didn't want to leave their family homesteads, and the large corporations didn't want to abandon their forest holdings, railroads, logging equipment, and the villages they established to house their workers.

In 1926, President Calvin Coolidge signed a bill establishing the Great Smoky Mountains National Park and the Shenandoah National Park, which allowed the Department of the Interior to assume responsibility for the administration and protection of the park in the Smokies as soon as 150,000 acres of land had been purchased.

This posed a major problem because the federal government was not allowed to buy land for national park use. As a result, the groups of citizens in Tennessee and North Carolina who had banded together to pursue the park effort formed a funding coalition that grew to include thousands of individuals, corporations, associations, and even schoolchildren who pledged their pennies.

By 1928, $5 million had been raised, but with the cost of land rapidly escalating, the sum wasn't sufficient to buy all that was needed. The salvation of the crusade came when the Laura Spellman Rockefeller Memorial Fund donated an additional $5 million to assure completion of the purchases.

In all, there were 6,000 small farms, large tracts, and other miscellaneous parcels of land that had to be surveyed, appraised, argued over, and sometimes condemned in court. Also, in addition to their holdings, the timber companies had to be compensated for equipment and standing inventories. It was a lengthy and often painful process that displaced families from their ancestral homeplaces.

By 1934, the states of Tennessee and North Carolina had transferred deeds for 300,000 acres to the federal government, at which time Congress authorized full development of public facilities. Workers building facilities were greatly aided by the Civilian Conservation Corps (CCC), an agency created during the Great Depression to provide young men with work and wages. The CCC developed roads, trails, campgrounds, and beautiful stone bridges and buildings between 1933 and 1942, when World War II shut the program down.