Darien, established on the mighty Altamaha River in 1736 by Scottish Highlanders, saw some of the first action of black troops in the Civil War when Federals looted and burned the town "to the ground" on June 11, 1863. Involved in the action was the 2nd South Carolina and the Massachusetts 54th, the U.S.C.T. regiment commanded by 25-year-old Col. Robert Gould Shaw and made famous in the movie Glory. Darien was an important shipping port before the War, exporting cotton grown inland and rafted down the river. During the War, the port was used by blockade runners and consisted of 75 to 100 residences, including three churches, a market house, a courthouse, and an academy.

Shaw's troops, stationed on St. Simons Island June 10-24, 1863, were ordered to Darien by Col. James Montgomery. The next day, the town was looted and burned, with the light from the fires visible from St. Simons Island, 15 miles away. Col. Shaw, the son of a famous Boston abolitionist, did not approve of burning the town and wrote letters to superiors about his feelings on the matter. Twenty-five days after leading troops to Darien, Shaw would be dead and buried in a mass grave with many of his men. He led the Massachusetts 54th on a suicidal assault of Battery Wagner, South Carolina, forever proving the battle courage of black troops in U.S. history.

Darien recovered from the Civil War to become the second largest lumber shipping port on the southern coast from 1870-1910. When timber resources were depleted, Darien became what it is today, a fishing village. Thirty-two historic sites are featured in a driving tour available at the Welcome Center. The only remains from the Civil War days are some tabby ruins, constructed from 1815-30, near the river on the west side of the bridge at Broad Street. Darien was the birthplace of John McIntosh Kell, a famed Confederate naval officer, who was executive officer of the Alabama throughout its brilliant career, and was present at its sinking at the hands of the Kearsarge off Cherbourge, France. 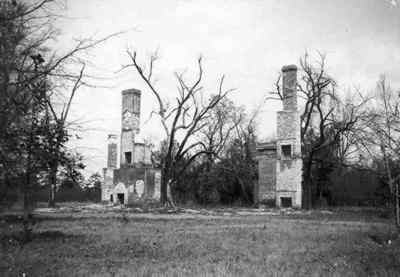 Midway Church is an excellent New England-looking structure that was built by Puritans in 1754, burned by the British during the Revolutionary War, and rebuilt in 1792. During Sherman's "March to the Sea," Union cavalry under Gen. Judson Kilpatrick occupied Midway and Sunbury, and Kilpatrick made his headquarters inside the church. His cavalry spent a month in Liberty County, destroying plantations and the railroad. Next to the church is Midway Museum, a replica of an 18-century coastal cottage, which houses exhibits and materials about Midway's history, including exhibits and information on the Civil War period. Many famous figures came from or trace their descendants back to Midway, including Oliver Wendell Holmes, Samuel Morse, Theodore Roosevelt, Jr., and Woodrow Wilson. Across the street is Midway Cemetery, which contains the graves of a large number of distinguished persons. A walking tour is available from the museum. Fort Morris Historic Site, 912-884-5999, is located seven miles east on GA 38 from exit 76 off I-95. Here is Fort Morris, which saw action in the Revolutionary War and War of 1812. The fort was located near Sunbury, which briefly rivaled Savannah as a seaport, until the British burned the town. Kilpatrick and his cavalry visited the town in 1864, burning a historic church as a signal to Sherman. It is portrayed in a mural in the Visitors Center.