Not much remains of the Ezra Church battlefield, the scene of a lopsided, bloody Union victory on July 28, 1864. Union Gen. W.T. Sherman was determined to cut the last railroad 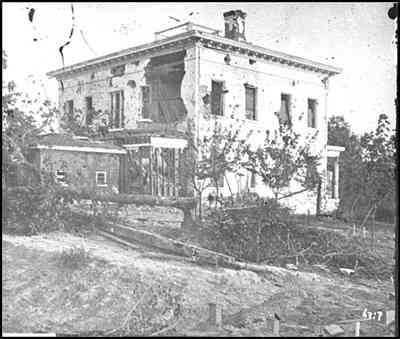 supplying Confederate Gen. John Bell Hood's troops located inside Atlanta's fieldworks. He sent troops under Maj. Gen. O.O. Howard counterclockwise around Atlanta to destroy the Macon & Western Railroad at East Point, which served the town from the south. Hood sent four divisions, two commanded by newly arriving Stephen Dill Lee, and two others by A.P. Stewart. Lee was to block the Federals while Stewart was to circle and come up on their rear. On July 28, near Ezra Church, Gen. Lee, without orders and before Stewart had arrived, launched assaults on an entrenched Union army and was severely beaten back. When Stewart arrived, he led several unsuccessful assaults, and became a casualty. Four assaults and three hours of fighting produced what is considered by historians to be the most one-sided victory of the entire war, with 3-5,000 Confederate casualties compared to 600 Federals. Gen. William Hardee reported to Hood that this battle had broken the proud spirit of the Army of Tennessee. Ten days and three battles since taking command, Hood had lost one-third of his infantry attacking entrenchments. Historical markers are found in and around Mozley Park, the main part of the battlefield where the log chapel Ezra Church was located. Nearby Westview Cemetery is another protected part of the battlefield, where Confederates rushed up to charge the center of the Union line. The solitary grave of Lt. Edward Clingman, killed at Ezra Church, is marked with engravings of a saber, pistol and Confederate flag, and is located along the eastern outer drive. Behind the grave is a section of Confederate trenches. On a nearby hilltop, a large marble soldier, one of the few monuments ever erected by Confederate veterans, stands guard over fallen comrades. The inscription speaks of peace: "Nation shall not rise up against nation. They shall beat their swords into plough shares and their spears into pruning hooks. Neither shall they learn war anymore. Of Liberty born of a Patriots dream; of a storm cradled Nation that fell."

The Battles of Utoy Creek, Aug 5-7, 1864, were Confederate victories. During the Siege of Atlanta, Sherman again tried to work his men closer to the Macon & Western Railroad by flanking the Confederate defensive line. While two of Sherman's generals squabbled, Gen. William Hardee extended his lines and entrenched on a ridge to meet the threat near Utoy Creek. The Yankees attacked the Orphan Brigade, but were bloodily repulsed. The next day they tried again, with even worse results. The Union quit the field with several hundred Federal casualties. The Confederates lost several dozen. The battlefield today is in Cascade Springs Nature Preserve (Instead of turning onto Centra Villa, continue driving on Cascade, which was the front line of the battle. Historical markers will be on the right, the nature preserve on the left). Utoy Church, circa 1828, is located two miles east of the battlefield at Venetian and Cahaba drives. The oldest Baptist church in present Fulton County, today Utoy Church is the Temple of Christ Pentecostal Church, Inc. This church served as a Confederate hospital, and apx. 25 Confederate graves from the Battle of Utoy Creek and the Battle of Atlanta are located in the northwestern cemetery, as is a portion of the Rebel defensive line a few feet north. In Adams Park, also located off Cascade, is a historical marker at the top of the 17th tee, marking the 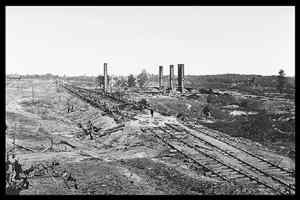 location of some of the few remaining Confederate entrenchments from the Siege of Atlanta. 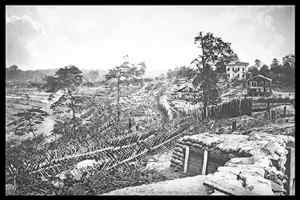 Not much remains at this location from the Civil War, but the historic event that took place here changed the nation. Lincoln's presidency and the Union was saved — and the Confederacy was doomed — after the fall of Atlanta. This is probably the most important Civil War event in Georgia. A historical marker, titled "Surrender of Atlanta," tells the story: Gen. Hood, in person with Stewart's A.C. and the Georgia Militia abandoned the city, Sept 1, as a result of Hardee's defeat at Jonesboro, August 31, and marched S. to Lovejoy's Station. Federal forces at Chattahoochee River Crossings, since Aug. 25, suspecting the evacuation of the city on hearing loud explosions, sent forward a reconnaissance to investigate. At this point it met Mayor James M. Calhoun with a committee, who tendered the surrender of the city, asking protection for citizens and property. Col. John Coburn, vice Maj. Gen. Henry W. Slocum, com'd'g 20th A.C. received the surrender. A short distance southeast from here at 793 Marietta St., a plaque on the Wells Fargo building and a street named Fort Hood Place mark the site of Fort Hood, which stood on the city's northwest fortifications. A stack of cannon balls, on 950 West Marietta Rd., marks the location of the marks the Dexter Niles House site, where Confederate Gen. Joseph Johnston learned he was replaced by Gen. John Bell Hood.