Transportation in the American Frontier 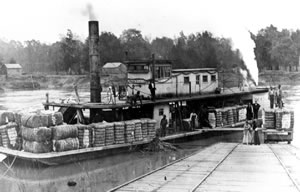 When de Soto came to explore the interior of America, Indian trails sprawled across the region between the Flint and Chattahoochee rivers just as they did throughout America. Some trails connected vast stretches of country, just as interstates of today. Other trails went to the nearest village or cut through the woods to the best river crossing. Many of these trails, especially the ones that went to the shallow fords across rivers and streams, were first trod by the mastodon and other prehistoric animals on their relentless search for water and food. The paths that connected longer distances were part of a great trading system.

Paths began to evolve into roads as more Europeans and later Americans entered the Indian territory. By nature, the paths were narrow, allowing only single-file traveling by the Indians or traders; but as time progressed, and permanent white settlers began crossing the Indian lands in wagons carrying their goods, trails had to be widened. Trees had to be cut and stumps removed. It was a laborious process. Sometimes a road would diverge from the original path for some reason, but for the most part, the newer, wider roads followed the existing footpaths.

Generally, Georgia's main Indian trails ran from east to west with a few connecting to other areas north and south. Today's Augusta was the main east-west gateway into Georgia with many major trails branching out across the state from there because it was a good place to cross the Savannah River. From Augusta the path led to the coastal town of Charles Town (Charleston, South Carolina), a major colonial trading port.

Probably the best-known and most heavily traveled Indian trail in Georgia was the Lower Creek Trading Path. From the trading center of Augusta, it ran westward across the state, following the geographical fall line. The fall line, which cuts directly through the Flint and Chattahoochee river valleys, crosses every major river at its lowest good crossing point. The route was formed thousands of years ago by herds of large animals migrating across the region and crossing the rivers at the shallow. It was only natural that the Indians following those animals would use the same crossing points. The trading path crossed the Flint River where Col. Benjamin Hawkins would establish his Creek Indian Agency around 1800 and continued westward to Columbus and then onward into Alabama.

With the Louisiana Purchase in 1803, President Thomas Jefferson recognized the importance of the most direct route possible between Washington and New Orleans. In 1805 Congress passed an act to establish a post road from "Washington City by Athens, Georgia, to New Orleans." Later that year, as part of the Treaty of Washington with the Creek Indian Nation, the Federal government secured the right of way for a wagon road through the Creek Territory, which would closely follow the route of the Lower Creek Trading Path. As much as anything, this agreement, signed by such Creek leaders as William McIntosh, ultimately led to the downfall of the Creek Nation.

By 1809, faced with the threat of war with Britain, the U.S. government determined that the Old Horse Path, as the wagon road had become known, would have to be upgraded to a military road for the purpose of moving supply wagons, cannons, and men on horse and foot. Despite protests from the Indians, the U.S. military began widening the Old Horse Path for that purpose. Completed in 1812, the Federal Road, as it was now called, was built in anticipation of conflict with the British, but it played an important role in the Creek War of 1813-14.

Trails that led to the Flint always found their way to the shallowest point in order for travelers to ford the river. Initially, travelers crossed by walking or riding horses over the rocky shoals. The first ferries built were usually just logs tied together to form a raft-like vehicle that was often pulled by horses. Later, most ferries were large wooden barges operated by a system of cables and pulleys and
powered with additional encouragement from a long wooden pole in the hands of a muscular ferryman. Horses were sometimes used.

How many ferries crossed the Flint is hard to determine, but there were plenty. In Macon County alone there were at least four ferries, at one time or another, crossing the Flint. The real heyday of ferries was in the nineteenth century, although some continued to operate well into the twentieth century. In 1920, the Georgia Highway Department took over the state road system and the ferries on those roads were purchased from private individuals who had been operating them. Toll charges were abolished at state-owned ferries. One by one though, bridges replaced the ferries.

The last ferry crossing in Georgia was on the Flint near Marshallville. At first, a wooden barge was used at the ferry, which was known over the years by various names, including the Miona Ferry, the Marshallville Ferry, Underwood's Ferry, and the Flint River Ferry. Later the craft in use was a 55-foot metal barge with a plank floor, powered by a six-cylinder 1954 Chevrolet engine rigged up to cables. The crossing was safe, smooth, and only took a couple of minutes. Unless the river was extremely high or there were problems with snags and floating logs, 24-hour service was available until 1988 when the ferry discontinued service.

Transportation improvements throughout Georgia were almost always aimed at aiding agriculture. By 1820 steam navigation on Georgia's rivers was just beginning. The first steamboat to travel the Apalachicola-Chattahoochee-Flint River System appeared in 1828. Steamboats regularly traveled the Chattahoochee as far as Columbus, the head of navigation on that river, and served more than a 100-mile stretch of the lower Flint. By 1860 more than 26 steamboat landings dotted the Flint between its junction with Chattahoochee and Bainbridge-all those landings loaded with cotton waiting for a trip down the river to the port of Apalachicola and northern markets. Navigation above Bainbridge was more difficult, but smaller boats and barges traveled the water from Bainbridge to Albany. In fact, Nelson Tift founded Albany as a purely financial venture to ship cotton to market on the Flint. Steamboats continued to thrive in the 1850s despite the competition of railroads, and remained in operation until about 1928.

The future of the land between the Flint and Chattahoochee, as well as that of the rest of the state, lay not with steamboats but with railroads. Georgians throughout the "Land Between the Rivers" were eager to lay the twin ribbons of iron that would bind together the state and the markets for their agricultural products. Like the steamboats preceding them, railroads primarily linked established commercial areas. In 1857, the first train of cars over the Georgia and Florida Railroad arrived in Albany, and the Upson County Railroad-built, financed, and operated by Upson County citizens-was completed.

By the end of the Civil War, many of the rail lines in southwest Georgia were twisted into "Sherman's bow ties," like most of the track in Georgia. But the railroads bounced back as large amounts of money for repairs came from northern businesses and banks desiring to get the South's industry and railroads back on their feet. Manchester and Amercius were two of the many towns that grew up along a repaired and extended rail system.