[Fig. 18(2)] Nature lovers will find Corkscrew Sanctuary one of the most memorable experiences of their vacation, and bird watchers will delight in the chance to add dozens of new names to their life list in just one afternoon. Nevertheless, were it not for the determined efforts of a consortium of conservation organizations, this primeval chunk of wilderness, which safeguards North America's largest remaining stand of ancient baldcypress trees and hundreds of species of plants, birds, and other animals, would have been lost.

During the 1940s and 1950s, Florida's majestic cypresses were relentlessly cleared for their valuable lumber. Impervious to decay and insects, cypress was the wood of choice for the tens of thousands of new homes mushrooming across post-war America and Europe. What's now Corkscrew Swamp Sanctuary was primed for the saws.

Every season is a good season for viewing the sanctuary's wildlife. What you see depends on the time of year, water levels, and the good fortune to be in the right place at the right time. Bring plenty of film, zoom lenses, binoculars, and a bird identification book.

From the visitor center, a 2-mile elevated boardwalk winds through the environmental zones. Before heading out, ask about rare or unusual sightings during the previous days. Early morning and late afternoon are the best times to observe the largest numbers of wildlife. The walk is self-guiding, but Audubon Society volunteers patrol the boardwalk to answer visitors' questions and point out things of special interest.

Plan to take your time, stopping often along the boardwalk. Stay as quiet as possible, and let noisy visitors pass by. With a little patience, and keen observation, you'll be amazed at the birds and other wildlife that will suddenly become visible.

The boardwalk passes over a wetland prairie then plunges right into a mature cypress swamp. Watch where you walk! A pair of southeastern lubber grasshoppers (Romalea microptera) might be mating in the middle of the boardwalk. These giant, slow-moving insects—bright yellow, black, and red and up to 2.5 to 3 inches long—have short, stubby wings incapable of flight. The grasshoppers protect themselves by sending out a foul odor that successfully fends off most would-be predators.

A Big Cypress fox squirrel (Sciurus niger) often sits on the guard rail, cautiously twitching its nose at the scent of advancing humans. Its reddish brown coat and buff-colored tail markings set it apart from the gray body and white belly of the common Eastern gray squirrel (Sciurus carolinensis).

A barred owl (Strix varia), patrolling for fish, frogs, and rodents, lands on a low limb and watches stoically as visitors aim cameras and binoculars at his perch. Even when not seen, barred owls are often heard hooting their distinctive "Who-cooks-for-you-who-cooks-for-you." 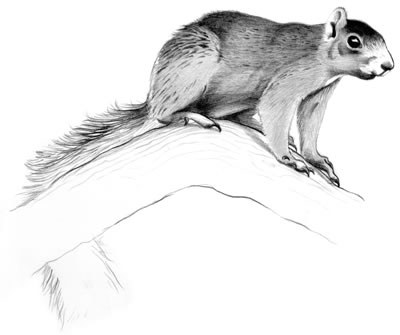 A black and yellow argiope (Argiope aurania), a brightly colored member of the orb-weaver family, wait patiently for prey in gigantic, zigzagging webs spun across several tree branches. If you accidentally run into the web, don't be concerned; an argiope is not harmful to humans.

Lettuce Lake, a low, clear area in the middle of the baldcypress swamp, teems with activity. Adult alligators cruise at snout level through big heads of water lettuce (Pistia stratiotes). The floating aquatic plant's complex root system is a haven for small fish and crayfish. Don't be tempted to gather it for a salad though: It's toxic to humans.

Under the boardwalk, newly born alligators left on their own soon after birth huddle together for protection on the muddy fringes of the lake. At this stage in life, they have to rely on small fish, frogs, and insects for survival. When they are much older and stronger, they'll be able to pursue large fish, waterfowl, and small mammals.

Brown and green anoles (small lizards, Anolis sagrei and Anolis carolinensis) scuttle swiftly along the railings. Green tree frogs chirp unseen among the leaves. Large pig frogs (Rana grylio) grunt in the water. Their meaty hind legs are a gourmet dish. Mosquitofish feed greedily on mosquito larvae and are in turn a tasty dish for larger fish, birds, and alligators.

Fresh from a meal-hunting plunge in the water, Anhingas (Anhinga Anhinga) rest on branches, and spread their silver and black wings to dry. Unlike other water birds, Anhingas lack the water repellent coating necessary to keep their feathers waterproof. Anhingas are also nicknamed "snakebirds" because they swim after fish with their long, S-curved necks above the surface of the water.

Double-crested cormorants (Phalacrocorax aritus) also lack waterproofing oils and must spread their greenish black wings to dry after a foray in the water. This underwater acrobat is shorter and thicker than an Anhinga. It swims with a dolphin's agility, with its hooked beak designed to catch, rather than spear, small and medium size fish. It nests in baldcypress and mangroves, in colonies that include Anhinga, herons, and other birds.

Visitors frequently hear the rat-tat-tat drumming of pileated woodpeckers, which carve large rectangular nesting cavities in tree trunks. The large black birds with a bright red crown are easy to spot flying through the treetops and landing on the trunk outside their nest cavities. Sometimes they can be seen using their strong beaks to tear away chunks of tree bark in search of insects. After the nesting period, the woodpecker's cozy nest is often taken over by other small birds, squirrels, wood ducks, and rat snakes. The red-bellied woodpecker (Melanerpes carolinus), which is smaller and has a small red patch on its head, is often mistaken for the red-headed woodpecker (Melanerpes erythrocephalus) which is black and white with a solid red head and neck.

The sanctuary is home to one of North America's largest colonies of wood storks. Also called wood ibis, ironhead, flinthead, and preacher bird, the endangered species is the only member of the stork family that makes its home in the United States. It catches fish and crabs by wading patiently through muddy water with its beak submerged, grabbing its prey and swallowing it instantly. Now you see it now you don't: The closing of a wood stork's beak is one of the swiftest moves in the animal world.

When conditions allow, wood storks nest from November through June. In the sanctuary, large colonies nest together high in baldcypress trees on thin platforms of sticks and vegetation. Males and females bond by clacking their bills and making coordinated body movements. A female typically lays three or four eggs, which incubate from 28 to 32 days. The nesting cycle from mating to fledgling of the young takes about four months, during which adults and chicks consume about 425 to 450 pounds of fish.

To breed successfully, wood storks must constantly consume large amounts of fish. And because storks hunt by feel rather than by sight, fish must be available in abundant, concentrated quantities. During the dry winter season, when water holes normally are reduced, fish are more tightly massed, making it easy for storks to satisfy their chicks' insatiable appetites. When rain and dry cycles don't occur on schedule, or when water flowing to the grasslands is interrupted, the rare birds' nesting activity is sharply curtailed.

Corkscrew's crowning glory is its magnificent stands of baldcypress (Taxodium disicum). These giants are the last of the baldcypress forests that once dominated the swamps of the southeastern United States and southern Florida. Most of Corkscrew's cypress trees were saplings when Columbus made his first voyage to the New World at the end of the fifteenth century. Allowed to flourish undisturbed, these 500-year-old titans tower 120 to 130 feet above the floor of the swamp.

Pond cypress (Taxodium disticum var. nutans) is smaller than baldcypress, growing to a still-impressive 80 to 90 feet. Its bark is lighter gray, and its needles point upward, while those of baldcypress are flatter and straighter.

Pond apple (Annona glabra) grows to about 50 feet. Its fruit, which looks like a greenish yellow Granny Smith apple, is a favorite food of squirrels, raccoons, birds, and other creatures. The bark is a home for orchids and other air plants.

Strangler fig is one of the predatory plants of the forest. Often reaching 50 to 60 feet or more, the strangler fig's roots are often thought to be vines growing on a host tree. As the roots grow, they wrap around the host tree. The fig's red and yellow fruit is a favorite food of pileated woodpeckers and other birds.

Over two dozen types of ferns provide a lush, tropical groundcover in places. A subspecies of Boston fern (Nephrolepis biseratta) is a threatened Florida plant. Strap fern (Campyloneurum phyllitidis), a swordlike species that grows in a clump on top of cypress knees and at the base of trees, is listed as a Florida threatened plant.

Resurrection fern, which attaches itself to the trunks and branches of many swamp trees, is a gauge of the sanctuary's rainfall. Leaves that are brown, curled, and seemingly dead indicate a recent lack of precipitation. But after a rainfall, it's possible to watch the "dead" leaves uncurl and turn a brilliant, lively green. Water fern (Salvinia minima) is a shade-loving plant that floats on the surface of the water, where it is sometimes misidentified as duckweed, another aquatic plant species.

Spanish moss, which drapes tree branches in wispy grey veils, isn't a moss at all, but an epiphyte, drawing moisture and nutrients only from rainfall and airborne organic matter that it traps. Like other species of air plants, it's not harmful to the host tree. All air plants are part of the Pineapple family.

Swamp lilies bloom virtually year-round, and most profusely in late summer. They're a popular munching food for white-tailed deer. Summer also sees a profusion of swamp hibiscus (Hibiscus coccineus), which catches the eye with its enormous, five-petaled, vibrant red flowers up to 8 inches wide on a plant that can grow up to 5 feet tall.

The pine flatwoods community is a high, dry area that lacks some of the exotic flair of the wetland areas and is frequently given only passing scant notice by visitors more anxious to see alligators and flocks of wading birds. The area is only 18 to 20 feet above sea level and briefly floods and quickly drains in summer and fall. It is kept open by periodic natural and controlled man-made fires.

Slash pines are the only member of the Pine family in the sanctuary, and many of them are 100 to 200 years old. They manage to live to such an old age because their thick bark and high canopy protect them from fires. Slash pines killed by lightning remain resistant to rot and may stand in place for decades, continuing to provide roosting areas for ospreys and other birds.

Sabal palms are found in Corkscrew's pine flatwood and sometimes in the swamp. It gets its "cabbage" nickname from its edible heart, a gourmet delicacy which, when removed, is fatal to the tree.

From March through May, the open fields are brilliantly hued with wildflowers. Yellow bachelor's button (Polygala rugelii) is easily recognizable by its thimble-shape butter-colored flower that crowns a 1- to 2-foot stalk. Its roots smell like wintergreen. Yelloweyed grass (Xyris spp.) is a favorite food of the wild turkey. Its small flowers with three bright yellow petals, bloom in summer and fall. Wax myrtle is abundant in the pine flatwoods and other areas of the swamp. Controlled fires prevent it from shading out sapling pines and other plants that require full sunlight. Wax myrtle berries, similar to bay berries, are sometimes used to make aromatic candles.

In summer and early fall, star-topped sedges (Dichromena colorata) form a sea of white along pine flatwood trails. This and other sedges can be identified by their triangular stems.