[Fig. 7] Key West and Great White Heron national wildlife refuges, with offices located on Big Pine Key, include hundreds of islands in the Gulf of Mexico and Florida Bay. Known locally as the backcountry, and accessible only by boat, the refuges protect more than 600 nautical square miles and about 10,000 acres of land in the Lower Keys. The islands have names such as the Marquesas, Woman, Joe Ingram, Barracuda, Crawfish, Mule, Big Spanish, Snipe, and Crane Key, and range in size from a few square yards to several hundred acres. Both refuges are of tremendous environmental importance. They protect about two dozen endangered species of birds and thousands of marine species.

West of Key West, Key West National Wildlife Refuge is the Keys' oldest national wildlife sanctuary. It was established by President Theodore Roosevelt in 1908 to curtail the mass slaughter and near-eradication of egrets, herons, and other birds for their feathers used in hat and clothing decorations. The refuge encompasses 375 square miles of open water and 2,019 acres of land, and it provides habitat for a wide variety of birds, including nesting or wintering populations of terns, frigatebirds, white-crowned pigeons, ospreys, and great white herons. Sand beaches serve as nesting areas for endangered Atlantic green and loggerhead sea turtles.

Great White Heron National Wildlife Refuge includes a huge array of pristine islands extending over 264 square miles in the Gulf of Mexico, including about 7,400 acres of land. Established in 1938, the refuge's red and black mangroves offer protection to the great white heron, America's largest wading bird. Other rare birds that nest here are white-crowned pigeon, roseate spoonbill, and the only known colony of laughing gulls in the Lower Keys. Endangered American crocodiles hide away in the tangled mangrove islands in northwestern and northeastern Florida Bay.

Until fairly recently, few people visited the backcountry. But as the mainline keys have become more congested, more boaters, fishermen, Jet Skiers, and other recreation seekers have been attracted to the small islands and shallow waters. Boat propellers have been especially devastating to shallow seagrass meadows. The use of personal watercraft, airboats, hover craft, sea plane landings, and water skiing are prohibited within Key West and Great White Heron national wildlife refuges.

Among the world's most productive ecosystems, seagrass meadows are nurseries for spiny lobster, crab, red drum, mangrove snapper, tarpon, snook, trout, jack crevalles, and many other marine species. Herons, egrets, bald eagles, terns, plovers, and other wildlife species also depend upon this important foundation of the aquatic food chain.

Most of the backcountry waters are only a few feet deep. Navigable channels that wind, usually unmarked, through intertidal flats are often difficult to follow. Without a knowledgeable guide to steer them through, hundreds of boats every year plow up the shallow bottom, uprooting the seagrass and leaving vast areas of scarred, unproductive habitat.

Damaged areas heal slowly, if at all, and are more vulnerable to erosive waves and currents. Boaters can reduce this senseless destruction, and avoid fines, by staying out of the shallows, which are a protected resource. 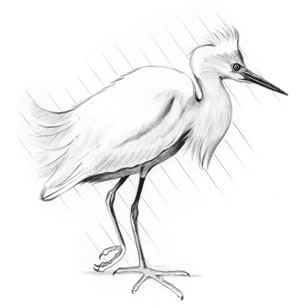 In the Lower Keys, the hardbottom community is a vital habitat of soft corals, sponges, and other invertebrates. Driving a boat over shallow hardbottom can destroy fragile sea life and seriously damage a boat's propeller. A quick guide to reading water depth goes like this: "Brown, brown, you'll run aground; white, white, you might; green, green, nice and clean; blue, blue, go on through."

Polarized sunglasses can also be helpful in reading the water depth. However, when riding into bright, glaring sunlight or on overcast or windy days, detecting water color and depth can be more difficult. Under those conditions, boaters are urged to slow down and stay in marked channels.

Those who run aground may find it necessary to walk or pole their boat to deeper water, or wait for the incoming tide. A lengthy push-pole with an oar-shaped blade is an almost mandatory piece of backcountry boating gear.

Boaters should wear sturdy sneakers or other footwear as protection against sharp coral and spiny sea urchins, and take along a hat and long-sleeve shirt. Also take insect repellent, sunglasses, water, food, rain gear, sunblock with at least 30 SPF, and a VHF radio. The U.S. Fish and Wildlife Service recommends other equipment such as binoculars, a compass, tide tables, and navigation charts. The service also recommends that boaters take a course in seamanship or boating safety and leave a float plan with a responsible person.

Increasing boat traffic is also having a detrimental effect on the backcountry's bird populations. Nesting birds' sensitivity to boat noises varies from species to species. The frequency, duration, proximity, and type of disturbance, as well as birds' past experience with humans, are other contributing factors. Many species are especially sensitive to disturbance during the breeding season, particularly just before or during incubation. An approaching boat can frighten a bird from its nest, leaving the eggs or hatchlings exposed to predators or intense deadly sunlight.