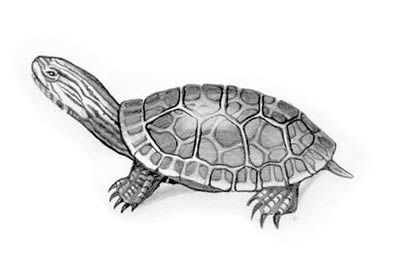 The Eastern chicken turtle (Deirochelyls reticularia reticularia)one of Virginias endangered speciesis found nowhere else in the state except at First Landing State Park. Even in the park, where there may be 10 or fewer individuals, the turtle is extremely rare. The chicken turtle takes its name from its long neck, which, when extended, is nearly as long as the brown-and-olive carapace. Hikers occasionally spot the turtles basking on a log in the parks freshwater swamp ponds.

Along the trail, look for wading birds such as green herons, snowy egrets, and great blue herons as they stalk fish, crayfish, and frogs at the swamps edge. Frog species identified here include the tiny but noisy spring peeper (Hyla crucifer), the green frog (Rana clamitans), and the bullfrog (Rana catesbiana). The eyes of many frogs protrude above their heads, allowing them to watch for insects with nothing but their eyes and nostrils above water. Or frogs may sit motionless on a lily pad for long periods of time, striking with amazing swiftness when an insect wanders within range.Trail. 1.5-mile, self-guided, easy loop from the visitor center through a cypress swamp. The trail may be cut in half by making a right turn on the intersecting road at the halfway point and returning to the visitor center. The park has an excellent brochure that interprets sites along the trail.