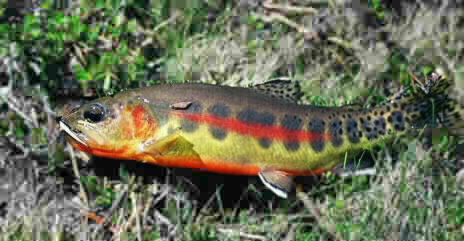 The California Golden Trout is an American original and the most beautiful of all the troutsan olive back spangled with golden highlights, yellow sides, a band of red over parr marks, orange belly, white-tipped fins, and dark oval spots. It is native to only one place in the world, the Kern River drainage of the Sierra Nevada south of Mt. Whitney. Because of its spectacular coloration it was hard for early scientists to classify it after its discovery. As a result of modern genetic research, only two valid subspecies of Golden Trout are now recognizedoncorhynchus mykiss aguabonita, commonly known as the Volcano Creek Golden, and the rarer o. m. whitei, commonly known as the Little Kern Golden. The two subspecies are very close, and only differ to the eye in that the Little Kern has more spots and spots below the lateral line. The Volcano Creek Golden does not have spots below the lateral line. It is important to know the difference because there are more restrictions on fishing for the Little Kern variety.

Many years ago there were two classifications for the Golden trout found in the easterly half of its original range: O.m. roosevelti (also salmo gardineri roosevelti), or Volcano Creek Golden, and o.m. aguabonita (also s. g. aguabonita), or South Fork Kern Golden . The drawing depicts the type specimen for o.m. aguabonita; the photo is a sample of the roosevelti type.In the 1930's it was decided they were really the same variety. Since o.m. aguabonita had been described scientifically first, the roosevelti name was dropped, and o.m. aguabonita became the official scientific name now recognized. A third type of Golden was once recognized, o.m. gilberti, or Gilbert trout or Kern River Rainbow, but it now appears this type was a ringer or rainbow x golden hybrid. Ive explained this because the old names and distinctions are still sometimes mentioned in guide books and other references that are not up to date. To help clear up the lingering confusion, the term California Golden has been officially adopted for all true Golden other than the Little Kern variety, and hopefully that will make things a little simpler from now on.

Aguabonita, by the way, refers to Agua Bonita Falls, which are the first falls above the confluence of the Kern River and Volcano Creek (also shown as Golden Trout Creek on many maps). This and secondary falls further up the stream became a barrier to upstream migration of trout after volcanic flows blocked the creek canyon 10,000 or so years ago. Barrier falls also block the South Fork of the Kern. That is fortunate since Golden trout hybridize (or breed) in the wild with Rainbow trout, and Rainbow were stocked in the Kern River and its tributary creeks for many years. As a result, genetically pure Golden trout are rare and seldom  found except in the small headwater creeks above the barrier falls, especially the Little Kern Golden, which is protected under the Endangered Species Act.

As a result of special efforts by California Fish and Game, the Little Kern Golden has been partially restored to its original range. It is now legal to fish for them in the Little Kern River and most of its tributaries during the general trout season (last Saturday in April to October 15). But some waters may be closed, so check the regulations carefully. As of this writing, Soda Springs Creek is closed to fishing. You are also limited to artificial lures and single barbless hooks treble hook spinners and salmon eggs or other bait are not legal for Little Kern Golden.

In another success story, by stint of stocking over many years the California Golden variety can be found widely in many lakes and streams of the Sierra Nevada. Cottonwood Creek and Lakes, the headwater lakes and creeks at the north end of Kern Trench, Sixty Lakes Basin, French Canyon Creek, or Mono Creek, are examples of areas where California Golden trout can be found. Even though the habitat within the wilderness has been degraded by grazing, and artificial barriers are needed on the South Fork of the Kern River to keep out Brown trout, Golden trout are still plentiful in the many meadow streams of Golden Trout Wilderness.

All varieties of  Golden trout are an anglers delight. They quickly adapted to the waters in which they were originally planted and are now almost all wild  fish. In the clear, cold waters of the Sierra Nevada, Golden trout are startlingly vigorous. They rise eagerly to dry flies and even a small fish will put up a stout fight, making many leaps. Please practice catch and release of these bright nuggets of living gold!